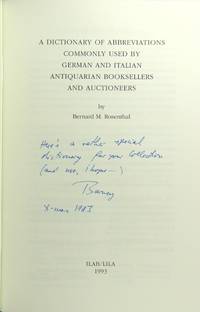 A dictionary of abbreviations commonly used by German and Italian antiquarian bo...

Members Nick Aretakis and Ben Kinmont have announced a limited edition book on the late Bernard M. Rosenthal, former-President of the ABAA and one of the most-esteemed scholar-booksellers of the twentieth century.

We are pleased to announce the publication of Bernard M. Rosenthal, a memorial to one of the most esteemed scholar-booksellers of the twentieth century and essential reading for anyone interested in the history of antiquarian books and manuscripts.

Bernard Rosenthal (1920–2017) is best known for having been one of the world’s leading specialists in medieval manuscripts and incunabula — and as the bookseller who made annotated books interesting and significant. His unpublished Catalogue 34 became Yale’s catalogue of The Rosenthal Collection of Printed Books with Manuscript Annotations (1997). As a work of scholarship, it led the way towards a fresh evaluation of the role of the reader in the afterlife of a book. It was also a testimony to Barney’s sheer brilliance as a book dealer, and his triumph over adversity in a costly field, for his pockets were never deep.

The Berkeley bookseller Ian Jackson was a close friend of Barney’s and wrote his obituary for The San Francisco Chronicle. At the request of The Wednesday Table, the dining club for Bay Area antiquarian booksellers founded by Barney almost thirty years ago, Jackson has expanded the original 1100-word obituary with almost 24,000 words of annotation in the typographic style of the great 17th-century scholar Pierre Bayle. For Jackson, Bayle’s design seemed the ideal format to illuminate the many facets of a remarkable person — what the Italians call a personalità poliedrica — and the story of his polyhedric family.

Issued in a limited edition of 400 numbered copies, this folio-sized memorial is printed letterpress by Richard Seibert and includes a photographic portrait of Barney by Elvira Piedra.

Copies of Bernard M. Rosenthal are available for $60 and can be ordered from: