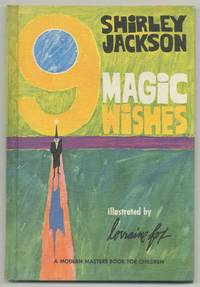 [New York] : The Crowell-Collier Press , 1963
offered by Between the Covers Rare Books 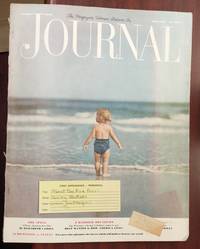 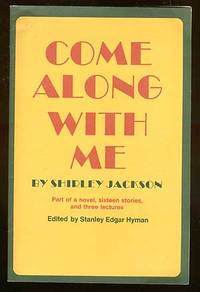 First Edition
(Advance Excerpt): Come Along With Me edited by Stanley Edgar Hyman

New York : Viking , 1968
offered by Between the Covers Rare Books 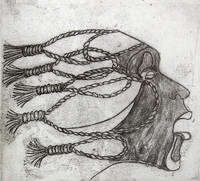 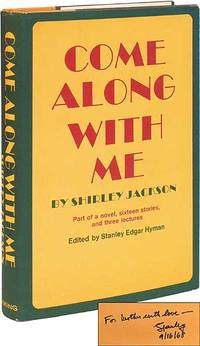 First Edition
Come Along With Me

New York : Viking , 1968
offered by Between the Covers Rare Books 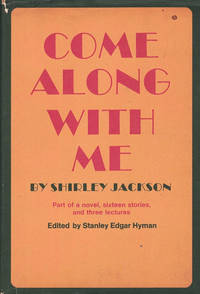 First Edition
Come Along with Me: Part of a novel, sixteen stories, and three lectures 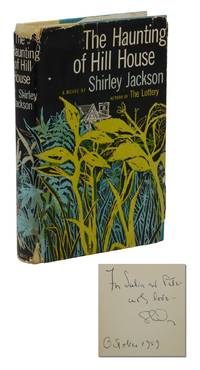 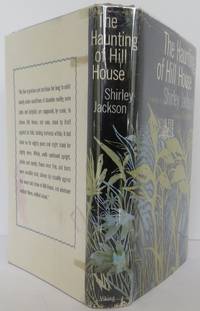 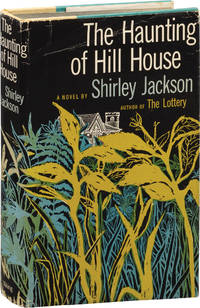 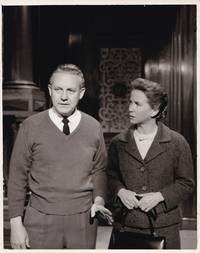 The Haunting (Original photograph of Robert Wise and Julie Harris on the set of ...

[We're reposting this piece from 2017 about the great Shirley Jackson because of the interest spurred in Jackson by the new film, Shirley (now streaming). Starring Elizabeth Moss as the reclusive author, the film is an adaptation of Shirley: A Novel by Susan Scarf Merrell.]

For those of you unfamiliar with Shirley Jackson’s work, consider yourself warned of potential SPOILERS right now and exit out of this page. Preferably to pick up one of her books and see for yourself.

I still remember the first Shirley Jackson piece I ever read. Like most American high-school teenagers, it was one of her short stories. A terrifying and eye-opening piece entitled The Lottery. To this day, I think it is one of the most horrifying works I’ve ever read (and this coming from an avid Agatha Christie fan). A work that reveals a callous and mindless side of human nature – just following the herd mentality, even if it involves killing your own mother – what wouldn’t be creepy about that? The Lottery has always stuck with me, and also have the other stories by Jackson that I have read since. We Have Always Lived in the Castle is a fan favorite for a reason! So here’s to the real question… what had this seemingly average American housewife done to become the architect of such frightening tales? Well… let’s take a look!

Shirley Hardie Jackson was born on December 14th, 1916 in San Francisco, California. She discovered writing at an early age, and during her teenage years dealing with stressful weight fluctuations and feeling like an outcast, writing was her main joy. She originally attended Rochester University, but after feeling unhappy there (with professors who judged her writing quite harshly), she transferred to Syracuse University where she thrived and finally felt like she fit in with her peers. She was involved with the University’s literary magazine, where she met her future husband, literary critic Stanley Edgar Hyman. Around 1935 she and her new husband moved to the sleepy town of North Bennington, Vermont, where Hyman taught at Bennington College and Jackson continued working on her writing. Later on, in 1954, Jackson would say of these years in North Bennington: “our major exports were books and children, both of which we produce in abundance. The children are Laurence, Joanne, Sarah, and Barry” (Twentieth Century Authors).

The Haunting of Hill House

New York: Viking, 1959. First. hardcover. near fine/near fine. 8vo, yellow & aqua cloth, d.w. New York: Viking, (1959). First Edition. One of the best ghost stories of the 20th century, and the basis for two films. Near fine, with the slightest of wear to the extremes of the dust wrapper.

When The Lottery was first published in The New Yorker in June of 1948, Jackson was catapulted to fame - the likes of which she never expected. The initial response to the story was extremely negative. Jackson received 400 letters from readers over the course of the summer – and only 13 were kind (and mainly from personal friends). Many readers instantly cancelled their subscriptions to The New Yorker. While Jackson would tell others that the tone of the letters ranged from “bewilderment, speculation, and plain old-fashioned abuse.” Readers wanted to know if such rites existed, and if so – where they could go and watch someone being stoned to death. They “declared the story a piece of trash.” What could a story possibly do to make people so violently angry? Well… remind them of their own cruelty and confuse them with their own emotions, of course. While Jackson was somewhat shocked by the extremely negative reception of her story, she often refused to give the readers the one thing they wanted… an explanation of what it “really means”. One sentence she was able to send to the San Francisco Chronicle gave an explanation (that I’m sure went over really well with the readers) as such: “I suppose, I hoped… to shock the story’s readers with a graphic dramatization of the pointless violence and general inhumanity in their own lives.” Zing!

The negative response her story received did not stop her, however. Jackson continued to write stories and would come to be known as a Mistress of Terror. Her subtle plots infused with strange characters and sinister themes and plots held her audience captivated. She wrote over 100 short stories throughout the years, some children’s stories and several novels. Her novels The Bird’s Nest (1954) and The Haunting of Hill House (1959) are commonly regarded as fantastical and ghostly stories, and have inspired authors Stephen King and Neil Gaiman in their own works. In 1962 she published her novel We Have Always Lived in the Castle, a story following two sisters after the mysterious and unsolved mass murder of their entire family in their childhood home.

So what made Shirley Jackson tick? What gave her these ideas? Her own husband has said of the matter that the darkness found in Jackson’s stories were not the side-effects of personal neurosis, but rather a result of the hard times she had seen of the world – “fitting symbols for [a] distressing world of the concentration camp and the [Cold War] bomb.” Jackson wrote of the psychological and physical destructiveness of human nature, and its consequences on others. Her stories obviously resonated with readers so upset by the simultaneous horror and unbelievably realistic nature (after all, many readers believed The Lottery was based on actual rituals experienced throughout the country) and forced all to take a deep look inside and wonder at the violence and evil that could be found in us all. One thing is for sure – were Jackson still alive today (she unfortunately passed away at only 48), I am sure she would find several ways to shock us all into submission.

Syracuse University, 1940. Elusive example of this short-lived college literary journal, self-published by Shirley Jackson and her future husband Stanley Edgar Hyman as an alternative to the official Syracuse University literary magazine. In a run of four issues, Spectre satirized the intellectual shortcomings of the student body, championed progressive politics, and stirred some mild campus controversy with its stylized nude illustrations. In this third issue, Jackson and Hyman confront the racial hypocrisy of the university, which refused to house black students on campus: "Marian Anderson sells out every time she comes here, but they won't allow negro girls in the college dormitories. Maybe it's all right if you're no closer than the sixth row." Jackson herself contributes an autobiographical short story, "Had We But World Enough," in which a penniless young couple imagine their future with a combination of longing and dread: "'The hell with you,' she said. 'You think I'm going to have children and ruin my whole life?' They laughed. 'Twenty children,' he said. 'All boys.'" Jackson and Hyman would marry shortly after graduation, and raise four children on her earnings as a writer. Known to her neighbors only as "Mrs. Hyman," the increasingly reclusive Jackson would publish some of the most unsettling fiction ever produced in America, including "The Lottery" (1948), The Haunting of Hill House (1959), and We Have Always Lived in the Castle (1962).

[New York: Farrar, 1958. Octavo, cloth-backed boards. First edition. THE SUNDIAL,]  Jackson's work, and one which she conveys with consummate skill ... All Jackson's work -- with the exception, perhaps of THE BIRD'S NEST, a clumsy novel about multiple personality -- is subtle, powerful and flawlessly written; it reveals Jackson's keen insight into human personality and human society and her cynical, even jaundiced view of the world and its occupants. She has left a legacy of complex, richly textured horror writing that requires little or no bloodletting for its haunting effectiveness." - S. T. Joshi, Pringle (ed), St. James Guide to Horror, Ghost & Gothic Writers, p. 292. "Comic modern Gothic novel concerned with the eccentric Halloran family who shut themselves away on the family's estate to await the apocalypse prophesied by the ghost of the family patriarch ... It can be read as a lighter treatment of the themes of isolation and family madness that dominate WE HAVE ALWAYS LIVED IN THE CASTLE (1962)." - Barron (ed), Fantasy and Horror (1999) 6-182. Barron (ed), Horror Literature 4-156. Tymn (ed), Horror Literature 4-120. Winter list, p. 269. A fine copy in fine dust jacket. A sharp copy of a book that is uncommon in nice condition.

London: Victor Gollancz, 1951. Hardcover. Fine/Very Good. First English edition. Fine in very good or better dustwrapper with a few small nicks and tears, and a small, faint splash mark on the spine. Author's third book, and second novel, and her first novel to deal with the darker regions of human nature and personality. Inscribed by the author to her in-laws, the parents of her husband, Stanley Edgar Hyman: "For Lulu and Dad with all my love - Shirley." The recipients were, along with her own parents, the dedicatees of Jackson's *Life Among the Savages.* Books inscribed by Jackson are uncommon, especially with any kind of significant association.

"You will do foolish things, but do them with enthusiasm.” -- Colette I readily admit that I am a fan of the badass literary woman. Give me Anais Nin, Marguerite Duras or Virginia Woolf any day – ... [more about Colette]