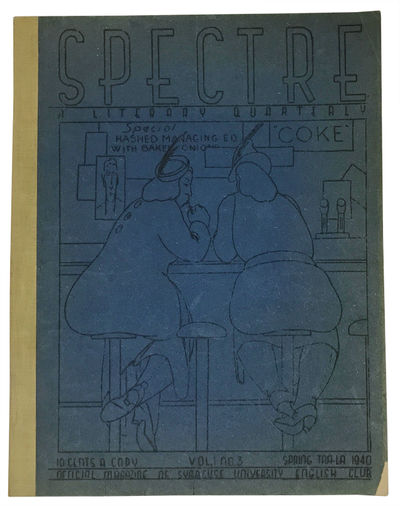 by Jackson, Shirley (editor); Hyman, Stanley Edgar (editor)
Syracuse University, 1940. Elusive example of this short-lived college literary journal, self-published by Shirley Jackson and her future husband Stanley Edgar Hyman as an alternative to the official Syracuse University literary magazine. In a run of four issues, Spectre satirized the intellectual shortcomings of the student body, championed progressive politics, and stirred some mild campus controversy with its stylized nude illustrations. In this third issue, Jackson and Hyman confront the racial hypocrisy of the university, which refused to house black students on campus: "Marian Anderson sells out every time she comes here, but they won't allow negro girls in the college dormitories. Maybe it's all right if you're no closer than the sixth row." Jackson herself contributes an autobiographical short story, "Had We But World Enough," in which a penniless young couple imagine their future with a combination of longing and dread: "'The hell with you,' she said. 'You think I'm going to have children and ruin my whole life?' They laughed. 'Twenty children,' he said. 'All boys.'" Jackson and Hyman would marry shortly after graduation, and raise four children on her earnings as a writer. Known to her neighbors only as "Mrs. Hyman," the increasingly reclusive Jackson would publish some of the most unsettling fiction ever produced in America, including "The Lottery" (1948), The Haunting of Hill House (1959), and We Have Always Lived in the Castle (1962). All copies of Spectre are rare: aside from Syracuse University, OCLC locates one microfilm copy at Yale. An evocative survival. Side-stapled volume, measuring 10.75 x 8.5 inches: 60 numbered leaves [120 pages]. Original dark blue pictorial wraps, beige cloth tape-bound spine. Sixty mimeographed leaves, printed on rectos only, black and white illustrations throughout text. Center crease to front cover and first few pages, shallow chipping and creasing to back cover, text block toned. (Inventory #: 1001760)
$2,200.00 add to cart or Buy Direct from Honey & Wax
Share this item
Honey & Wax Booksellers
Offered by

Engraved invitation to the opening ceremonies of the Brooklyn Bridge

New York : Tiffany & Co , 1883
(click for more details about Engraved invitation to the opening ceremonies of the Brooklyn Bridge)

[Philadelphia] : [United Church Press] , 1968
(click for more details about Each A Heart)
View all from this seller>