REPORT OF THE GREAT CONSPIRACY CASE. THE PEOPLE OF THE STATE OF MICHIGAN VERSUS ABEL F. FITCH AND OTHERS, COMMONLY CALLED THE RAIL ROAD CONSPIRATORS: TRIED BEFORE HIS HONOR WARNER WING, PRESIDING JUDGE OF THE CIRCUIT COURT FOR THE COUNTY OF WAYNE, AT THE MAY TERM, 1851, IN THE CITY OF DETROIT. CONTAINING THE EVIDENCE, ARGUMENTS OF COUNSEL, CHARGE OF THE COURT AND VERDICT OF THE JURY 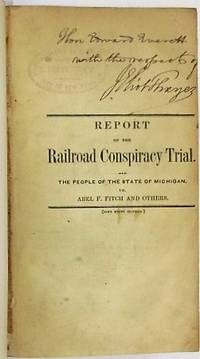 by [Fitch, Abel]
Detroit: Advertiser and Free Press, 1851. [2], 175, [1 errata], 283, [1 blank], 399, [1], 8 pp. Bound in legal buckram, gilt-stamped spine title and call number. Light scattered spotting, rubberstamp on title and half title. Half title inscription to Edward Everett from J. Eliot Thayer. Good+. Fitch was allegedly the chief conspirator in a plot to sabotage the Michigan Central Railroad. William Seward participated prominently in the defense of his case. "This tragicomedy resulted largely from the killing by the newly built and unfenced Michigan Central Railroad in the 1840s of cattle and other livestock straying onto its right of way, and refusal by the railroad to pay farmers the full value for this livestock. There developed a fierce feud between the operators of the railroad and the farmers and others living along its line, particularly in Jackson County, where there was much sabotage against the railroad. The railroad, instead of trying to mitigate the controversy, acted in a high-handed manner" [Greenly] and brought suit after the burning of its freight house in Detroit. Fitch and others, arrested for the crime, were denied bail; he died in jail during his trial, which is reported here in full, with long sections devoted to the defendants' testimony and the arguments of counsel. Greenly 93. Marke 986. Cohen 12144. (Inventory #: 22553)
$375.00 add to cart or Buy Direct from
David M. Lesser, Fine Antiquarian
Share this item
David M. Lesser, Fine Antiquarian Books LLC
Offered by

INVENTORY & APPRAISEMENT OF THE PROPERTY OF DR. E. SMITH DECSD

CONGRESSIONAL TEST ACT EXAMINED IN TWO LETTERS, IN WHICH ARE CONSIDERED, FIRST- THE CONSTITUTIONALITY OF THE ACT, AND SECOND- ITS PROPER CONSTRUCTION AND APPLICATION

Lynchburg : Virginian Power-Press Printing Office , 1865
(click for more details about CONGRESSIONAL TEST ACT EXAMINED IN TWO LETTERS, IN WHICH ARE CONSIDERED, FIRST- THE CONSTITUTIONALITY OF THE ACT, AND SECOND- ITS PROPER CONSTRUCTION AND APPLICATION)
View all from this seller>