The Portrait Drawings of William Rothenstein, 1889-1925. An Iconography [WITH 101 COLLOTYPE PLATES] 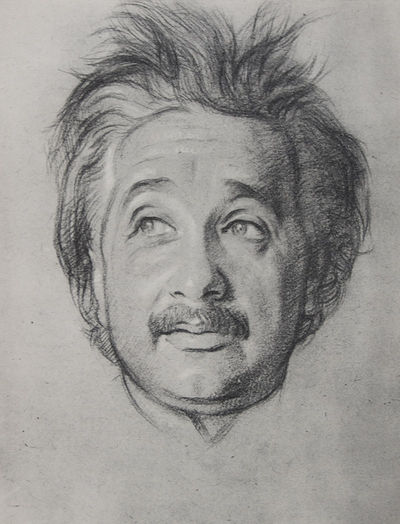 by Rothenstein, John (Text by); Max Beerbohm (Preface by)
London: Chapman & Hall Ltd, 1926. Limited First edition. Hardcover. g- to vg. 1/520. Folio (13 1/2 x 10 1/2"). xviii, 121, [1]pp (Text), ci (101) leaves (Plates). Original full brown cloth, with gold lettering to spine and front cover. Title page in red and black lettering. Splendid catalogue raisonné of William Rothenstein's portrait drawings illustrated with 101 tissue-guarded collotype plates depicting the portraits of 130 personalities of the period between 1889 and 1925, such as: Edmond de Goncourt, Alphonse Daudet, Emile Zola, Paul Verlaine, Edgar Degas, George Bernard Shaw, John Singer Sargent, W. B. Yeats, Henry James, Adolf von Menzel, Auguste Rodin, Anatole France, H. G. Wells, Aldous Huxley, the Earl of Balfour, Albert Einstein, Gabriel Seligman, and many more. 29 of the 101 full-page collotypes contain two portraits. One of 520 copies, of which this is No. 429. Binding partly rubbed and slightly stained along edges. Some creasing at corner of pages 69-76 (not affecting lettering). Binding in overall good- to good, interior in very good condition. About the artist: Sir William Rothenstein (1872-1945) was an English painter, printmaker, draughtsman, lecturer, and writer on art. Emerging during the early 1890s, Rothenstein continued to make art right up until his death in 1945. Though he covered many subjects ranging from landscapes in France to representations of Jewish synagogues in London, he is perhaps best known for his work as a war artist in both world wars, his portraits, and his popular memoirs, written in the 1930s. More than two hundred of Rothenstein's portraits of famous people can be found in the National Portrait Gallery collection. The Tate Gallery also holds a large collection of his paintings, prints and drawings. Rothenstein served as Principal at the Royal College of Art from 1920 to 1935. He was knighted in 1931 for his services to art. (Inventory #: 43097)
$100.00 add to cart or Buy Direct from
Eric Chaim Kline Bookseller
Share this item