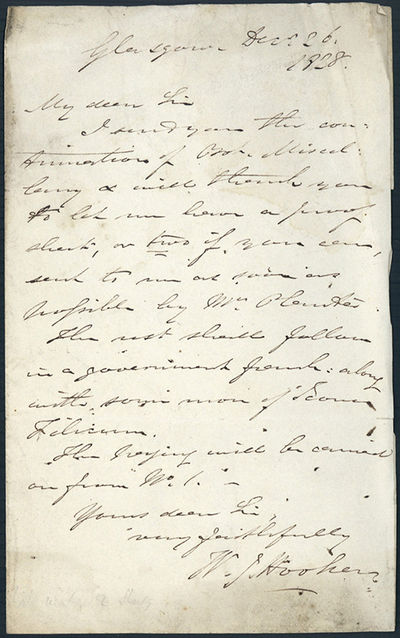 by Hooker, William Jackson
Glasgow, 1828. Hooker, William Jackson (1785-1865). Autograph letter signed to Richard Taylor (1781-1858). 1p. plus address leaf. Glasgow, Dec. 26, 1828. 206 x 128 mm. Some soiling, a few small marginal tears, but good to very good. From botanist William J. Hooker, the first full-time director of the Royal Botanic Gardens at Kew and author of over two dozen works on botany, to printer and publisher Richard Taylor, editor of the Philosophical Magazine and founder of the firm of Taylor and Francis. Hooker was appointed head of the Royal Botanic Gardens in 1841; under his leadership Kew grew from eleven acres to its present size of nearly 300 acres, and its collections vastly increased, largely due to a network of Hooker's former students who brought in specimens from around the world. At the time of this letter, Hooker was regius professor of botany at the University of Glasgow, a position he held from 1820 until his appointment to Kew Gardens two decades later. During this time Hooker published a number of important botanical works, two of which are mentioned in our letter: "I send you the continuation of Bot. Miscellany & will thank you to let me have a proof sheet, or two if you can, sent to me as soon as possible by Mr. Plante. "The rest shall follow in a government pouch, along with some more of Icones Filicum. "The paging will be carried on from No. 1." "Bot. Miscellany" refers to Botanical Miscellany, an illustrated botany magazine edited by Hooker that was issued in three volumes between 1830 and 1833. Also mentioned in this letter is Hooker's Icones Filicum, a two-volume illustrated work on ferns co-authored with R. K. Greville and published between 1829 and 1831. (Inventory #: 44373)
$850.00 add to cart or Buy Direct from
Jeremy Norman & Co.
Share this item
Jeremy Norman & Co., Inc.
Offered by