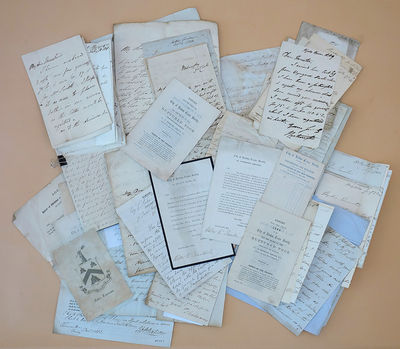 by Taunton, John Colley; City of London Truss Society
1865. City of London Truss Society. Archive of 65 documents, including autograph letters signed (mostly to John Colley Taunton [d. 1858]), printed reports and other ephemera. 1822-65. Some documents soiled or dampstained, a few with tears, but overall good to very good. Calendar of the archive included. The City of London Truss Society, a highly successful British charitable organization, began operating in 1807 and continued well into the twentieth century (Sir Geoffrey Keynes, the well-known surgeon and bibliographer, served on the Society's medical staff in the 1930s). A notice published in the Philosophical Magazine in 1813 describes the genesis of the Society: "From the great number of persons among the laboring poor who were afflicted with hernia, and for whose relief no adequate provision existed, on the 14th of October 1807 Dr. Squire, Dr. Herdman, John Taunton, the Rev. H. G. Watkins, James Horton, Michael Bartlett, Joseph Atkinson, John Middleton, John Gardner and John Whitford, met at the City Dispensary, and formed themselves into a Society 'for the relief of the ruptured poor throughout the Kingdom, the City of London Truss Society'" (Philosophical Magazine 43 [1813]: 316). John Taunton (1769-1821), surgeon to London's city dispensary, was appointed the Truss Society's first surgeon; after his death, his son John Colley Taunton took over the post, remaining there until his own death in 1858. By 1813 the Society was treating nearly 2000 patients annually; by Taunton's death in 1821 this number had increased to over 3500; and by the end of the nineteenth century the Society was employing three surgeons and seeing over 10,000 patients per year. The archive we are offering contains 65 documents, of which all but seven are handwritten. Of the 58 handwritten documents, the majority are letters to (and a few from) John Colley Taunton. The most notable correspondent represented here is physiologist and surgeon Benjamin Collins Brodie (1783-1862), whose letter to Taunton advises him on a urinary tract infection in a patient. Four of the letters are from surgeon William Kingdon (1789-1863); two of these recommend poor patients to the Society's care. 31 letters are from Samuel Cartwright (1789-1864), a dentist and one of the vice-presidents of the Truss Society; nearly all of his letters have to do with donations to the Society, and several include the exact amounts given. Another group of letters is from Mary Tanner, presumably a patient; two of these letters include prescription notes in what is presumably J. C. Taunton's hand. Also included in this archive are three of the Society's annual reports, for the years 1862-1864; a printed subscription card; and two printed invitations from the Society addressed to Walter K. Taunton. A complete calendar of the archive is included. Royal College of Surgeons, Plarr's Lives of the Fellows Online. (Inventory #: 44372)
$2,750.00 add to cart or Buy Direct from
Jeremy Norman & Co.
Share this item
Jeremy Norman & Co., Inc.
Offered by