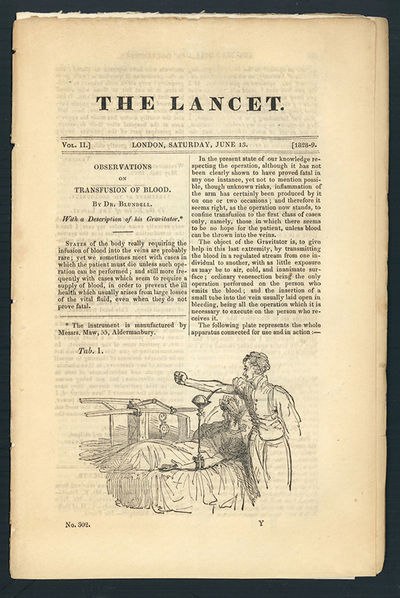 by Blundell, James
1828. Blundell, James (1790-1877). Observations on transfusion of blood. In The Lancet 2 (1828-29): 321-24. Wood-engraved illustrations. Contained in an extract from The Lancet 2, no. 302 (June 13, 1828), consisting of pp. 321-336. 224 x 150 (uncut). Disbound. Minor toning but very good. First Edition, journal issue. Blundell, a British obstetrician, was the first to perform a human-to-human blood transfusion in which the patient survived. "Blundell established the most fundamental points in transfusion, including the incompatibility of interspecies transfusion and the method of indirect transfusion. With his descriptions of about ten cases over a ten-year period, Blundell revived interest in blood transfusion after a century-long hiatus" (Garrison-Morton.com 2017). ). The paper's two illustrations show Blundell's "Gravitator," a transfusion apparatus that was used throughout the 19th century. The present extract also includes a summary of Dieffenbach's report on transfusion experiments performed in France over the previous quarter-century. . (Inventory #: 44358)
$750.00 add to cart or Buy Direct from
Jeremy Norman & Co.
Share this item
Jeremy Norman & Co., Inc.
Offered by