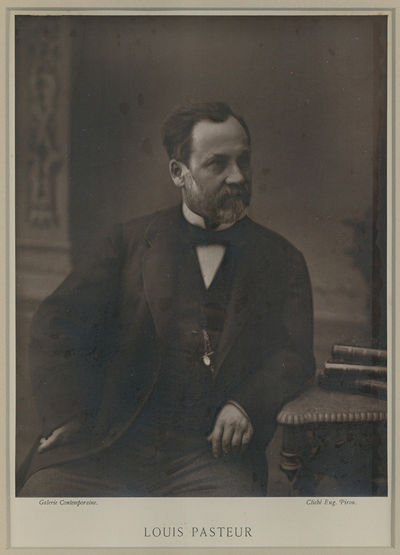 by Pasteur, Louis
Galerie Contemporaine. Woodburytype portrait photograph by Eugène Pirou (1841-1909). [Paris:] Galerie Contemporaine, n.d. [between 1876 and 1884]. Archivally matted and framed; frame measures 415 x 335 mm. Fine. A handsome half-length portrait of Pasteur in middle age, showing him seated at a table. The photograph appeared in Vol. 8 of the Galerie Contemporaine, a series of woodburytype photographs issued in installments between 1876 and 1884 and later assembled into volumes; it was "the most impressive set of celebrity portraits published in nineteenth-century France, forming a vital visual record of the leading figures who shaped public life, in science and politics as well as the arts, during the Second Empire and the emergent Third Republic" (Encyclopedia of Nineteenth-Century Photography I, p. 567). Pirou, the photographer, is also known for having made one of the earliest pornographic films, "Le Coucher de la Mariée" (1896). . (Inventory #: 44418)
$750.00 add to cart or Buy Direct from
Jeremy Norman & Co.
Share this item
Jeremy Norman & Co., Inc.
Offered by