Archive of 38 documents, including letters, manuscript charts, printed documents etc., relating to the Moorsom System of calculating cargo capacity in ships and the British Association for the Advancement of Science's efforts to improve it 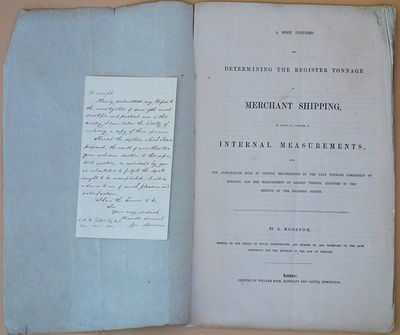 by Moorsom System
1850. Moorsom System. Archive of 38 documents, including letters, manuscript charts, printed documents etc., relating to the Moorsom System of calculating cargo capacity in ships and the British Association for the Advancement of Science's efforts to improve it. 1850-57. Some dust-soiling, minor tears, one document heavily creased and frayed, but overall very good. Calendar of the collection included. A unique maritime archive recording some of the events surrounding the introduction in 1854 of the Moorsom System for calculating tonnage. Named for its creator George Moorsom (1796-1867), the Moorsom System established a new method of calculating the cargo capacity (tonnage) of British ships as a basis for assessing harbor fees and taxes. Previous methods of calculating tonnage had been intended to determine the carrying capacity of sailing ships, using a formula based on a ship's length and maximum beam (width). Such methods could not be used on the new steam-powered ships, however, since they did not take into account the significant amount of internal space taken up by a steamship's boilers, fuel and machinery. In 1849 the British government appointed a Tonnage Commission to study the problem, with Moorsom, a naval architect, serving as the Commission's secretary. In the Commission's report Moorsom introduced a new unit of tonnage measurement, 100 cubit feet, as well as new rules for calculating a steamship's net tonnage, in which the space given over to machinery and other non-revenue producing functions was subtracted from its overall internal volume. The British government initially chose not to adopt the Commission's report, but Moorsom, refusing to give up on his system, "subsequently took up the matter alone, and by his skill and untiring energy succeeded in establishing the present rule of tonnage, known as ‘Moorsom's Rule'" (obituary of Moorsom in Transactions of the Royal Institution of Naval Architects 8 [1867]: xxxi). Moorsom's efforts are represented by two items in this archive: His pamphlet titled A Mode Proposed for Determining the Register Tonnage of Merchant Shipping [1851], and his accompanying presentation letter to Christopher Rice Mansel Talbot (1803-90), an influential Member of Parliament, in which Moorsom gave a detailed critique of a rival tonnage system proposed by Board of Trade president Henry Labouchere (1798-1869): ". . . I have to confess that the late Commission having adopted the principle of Displacement, on External Measurement, as a basis for Tonnage, which you represented to Mr. Labouchere as inapplicable to Merchant Shipping, was a mistake on its part . . . Being, however, subsequently made aware that a ship is generally full before being immersed to her load draught, and could therefore carry more had she more internal space, I became convinced that the profits of the ship being, thereby, in proportion, generally speaking, to the Internal Capacity, that capacity must be the proper basis for assessment. This being admitted, the objections to External Measurement become fully substantiated. . ." The British Government eventually adopted Moorsom's system as part of the Merchant Shipping Act of 1854. The system was not without its problems, however, and in August 1856 the British Association for the Advancement of Science appointed a committee "to inquire into the defects of the present methods, and to frame more perfect rules for the measurement and registrations of ships and of marine engine power, in order that a correct and uniform principle of estimating the actual carrying capabilities and working power of steam ships may be adopted." The bulk of our archive relates to the activities of this committee, which presented its 67-page report to the BAAS in August 1857. Much of the archive consists of correspondence to and from members of the BAAS committee, which was made up of eminent British shipbuilders, engineers, naval architects and naval officers. Represented here are naval architect John Scott Russell (1808-82), who collaborated with I. K. Brunel on building the steamship Great Eastern; engineer William Fairbairn (1789-1874), president of the Institution of Mechanical Engineers and an early builder of iron-hulled ships; Dr. Joseph Woolley (1817-89), a founding member of the Institute of Naval Architects and a pioneer in British naval education; Bennet Woodcroft (1803-79), inventor of fundamental improvements to ship propulsion; and Rear Admiral Constantine Richard Moorsom (1792-1861), chairman of the London & North Western Railway (and apparently no relation to George Moorsom). Also included in the archive are printed and manuscript charts, large printed diagrams of ships with manuscript annotations; committee records including subscription lists; and a copy of the BAAS's Report from the Mersey Inquiry Committee to the Meeting at Cheltenham, 1856 inscribed by George Rennie (1791-1866), whose firm built the engines for the world's first propeller-driven steamship. Some of the letters and documents in this archive were later incorporated into the BAAS's 1857 Report . . . to Inquire into the Defects of the Present Methods of Measuring and Registering the Tonnage of Shipping. . (Inventory #: 44390)
$2,750.00 add to cart or Buy Direct from
Jeremy Norman & Co.
Share this item
Jeremy Norman & Co., Inc.
Offered by