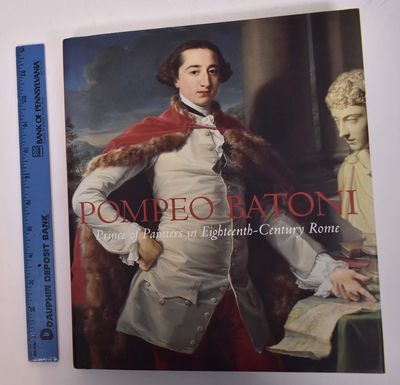 by Bowron, Edgar Peters and Peter Bjorn Kerbe
New Haven: Yale University Press, 2007. Hardcover. VG/VG, clean, crisp, and tight but with a bump to tail of spine and a hint of age toning to page fore edges.. Cream cloth/boards; gilt lettering. Color-illustrated dj with ivory lettering on maroon spine. x, 230 pp. with color and duotone images throughout. Published in conjunction with the exhibitions held in Houston and London between October 2007 and May 2008. Divided into 5 chapters, each with essays and images. Pompeo Batoni (1708-1787) was the most celebrated painter in Rome in his day. For nearly half a century he recorded the international travellers who visited the city on the Grand Tour, and these portraits remain among the most memorable artistic accomplishments of the period. His allegorical, religious, and mythological paintings were also highly prized by royal and aristocratic patrons and collectors in Britain and on the Continent. This book, published in celebration of the tercentenary of Batoni's birth, offers a vivid appreciation of his work. More than 150 full-colour illustrations represent the finest examples of his paintings from public and private collections in Europe and the United States. Some of these works are newly discovered, and others have never before been on public display. The illuminating text by Edgar Peters Bowron and Peter Bjorn Kerber explores the textual and visual sources for Baroni's history paintings, often undeservedly neglected in favour of his portraits; the origins and prototypes of his portrait style; the extraordinary patronage Batoni enjoyed as perhaps the only eighteenth-century painter to work for virtually all of the major European courts; his working methods and techniques; and his critical reception. - Google Books. (Inventory #: 162639)
$80.00 add to cart or Buy Direct from Mullen Books
Share this item