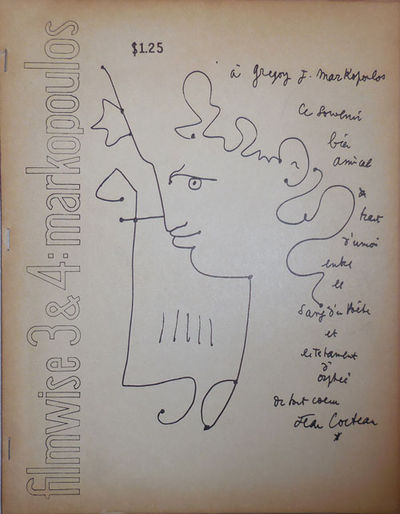 by Film - Sitney, P. Adams, Editor (Gregory J. Markopoulos, Stan Brakhage, Parker Tyler, Gerard Malanga et al)
Hartford: Cinema 16 and the Film-makers Cooperative, 1963. First edition. Paperback. Very Good. 4to, Side-stapled wrappers. The cover is lithographed from a drawing by Cocteau. Cover design is by Richard Tuttle. 68 pp. With contributions by Curtis Harrington, Gregory Battcock, Karen Kingel, Stan Brakhage and others including, Gregory Markopoulos for whom this special double-issue is featured. SIGNED by Markopoulos and numbered 130. The magazine is published by Cinema 16 and the Film-makers Cooperative. Paper is tanned with age and somewhat brittle, but is otherwise in clean very good condition. In all, P. Adams Sitney edited six issues of Filmwise (in four volumes). All are notoriously hard to find. A small handful in institutional hands, with almost no complete sets shown in WorldCat. Very early writings from several of the contributors including Brakhage and Malanga. (Inventory #: 24305)
$875.00 add to cart or Buy Direct from Derringer Books
Share this item
Derringer Books
Offered by

No Place : Sutton Hoo , 2004
(click for more details about Naming)
View all from this seller>