True to Life: Twenty-Five Years of Conversations with David Hockney 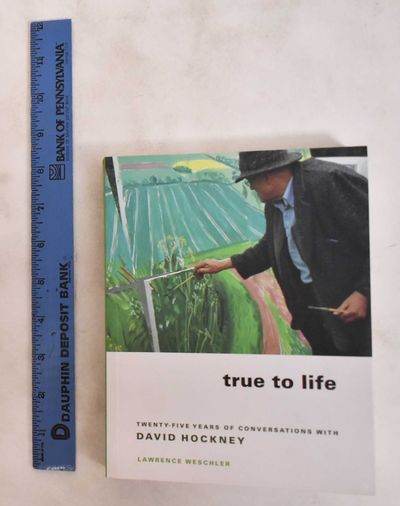 by Weschler, Lawrence
Berkeley, California: University of California Press, 2008. First. Paperback. As New. Galley copy/uncorrected proof. Color-pictorial white wraps. NO French flaps. [xx] 249 pp. with 82 bw figures and no color plates. Letter and other information from publicity director of UC Press laid in. From the publisher--Soon after the book's publication in 1982, artist David Hockney read Lawrence Weschler's Seeing Is Forgetting the Name of the Thing One Sees: A Life of Contemporary Artist Robert Irwin and invited Weschler to his studio to discuss it, initiating a series of engrossing dialogues, gathered here for the first time. Weschler chronicles Hockney's protean production and speculations, including his scenic designs for opera, his homemade xerographic prints, his exploration of physics in relation to Chinese landscape painting, his investigations into optical devices, his taking up of watercolor—and then his spectacular return to oil painting, around 2005, with a series of landscapes of the East Yorkshire countryside of his youth. These conversations provide an astonishing record of what has been Hockney's grand endeavor, nothing less than an exploration of "the structure of seeing" itself. (Inventory #: 162670)
$50.00 add to cart or Buy Direct from Mullen Books
Share this item