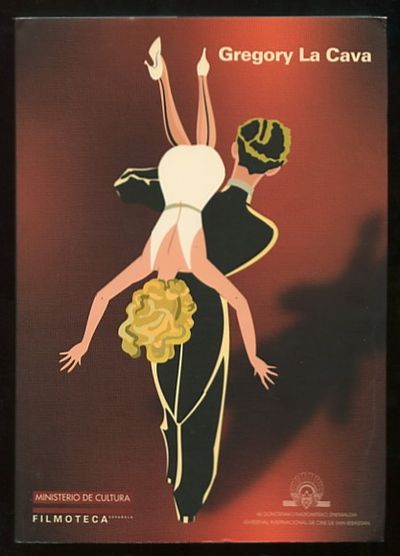 by Partearroyo, Tony, ed.
San Sebastián/Madrid: Festival Internacional de Cine de San Sebastián / Filmoteca Española. Near Fine. 1995. First Edition. Softcover. 8486877156 . [nice clean book, very slight wear along bottom edge of front cover, minor bump to top right corner of front cover, some scuffing and surface wear to rear cover]. Trade PB (B&W photographs, cartoons) Full-length survey of the life and films of writer-director La Cava, who began as an animator in the 1910s, graduated to directing two-reel comedies by the early 1920s, and went on to direct a number of sophisticated comedy features during the 1930s, most notably MY MAN GODFREY (1936) and STAGE DOOR (1937). He was also a talented cartoonist, and included among this book's illustrations are a number of examples of his work in that vein. NOTE: the text of this book is entirely in Spanish -- but to my knowledge, not only has it not been published in an English-language edition, there is also no comparable study of La Cava available in English. And even if you don't read the language, this volume is extremely valuable for its lengthy, complete and very detailed bio-filmography, which takes up nearly one-third of the book's 317 pages. Additionally, laid in are several pages worth of information relating to various screenings and retrospectives of La Cava's films (all this extra material is in English). . (Inventory #: 23431)
$75.00 add to cart Available from ReadInk
Share this item
ReadInk
Offered by