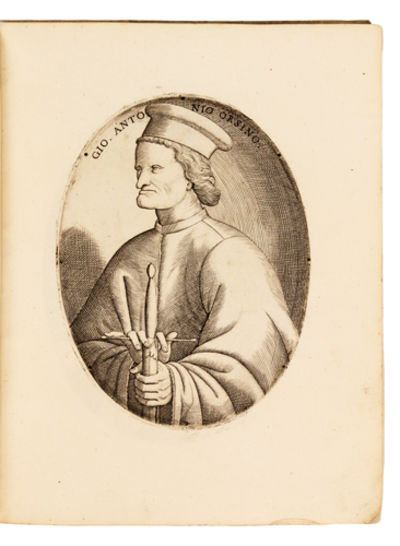 by ROTA, Martin; DOMENICO ZENOI; NICOLO NELLI; ROTA
1569. ROTA, Martino, Nicolò NELLI, & Domenico ZENOI. Imagines Quorudam Principum, et Illustrium Virorum. Ritratti di alcuni prencipi, et huomini illustre. Bolognini Zaltery formis. Engraved title-page followed by 71 engraved plates. 4to., 260 x 200 mm, bound in contemporary limp vellum, title in manuscript on spine, preserved in a recent red half morocco folding box. Venice: Bolognini Zaltieri, 1569. A rare series of Renaissance portraits by engravers from the school of Marco Antonio Raimondi. These striking images are the work of Martino Rota (1520-1583), Nicolò Nelli (1552-1579) and Domenico Zenoi (ca. 1560-1580), often signed by the engraver and dated between 1566 and 1568. The portraits depict royalty and other famous people of the day, 58 of which sit within highly accomplished complex architectural frames of Renaissance taste. The remaining portraits are depicted within an oval against a blank background as well as two of sultans riding on horseback. Being the work of craftsmen rather than fine artists, it stands to reason that the engraved borders often overshadow the portraits. They provide a forum for Rota, Nelli, and Zenoi to each demonstrate their considerable skill at engraving a mélange of subject matter like complex scroll work and grotesquery. However, the subjects in ovals without borders seemingly incomplete, are intriguing in their own right. A rare book, somewhat complicated by the fact that the number of plates in copies located varies considerably; The Morgan Library has a copy with 57 plates, LC with 31, Biblioteca Nacional de Espana 53, Herzogin Anna Amalia 67. Two copies appear to have more plates at the NYPL and Rostock University with 75. Rare Book Hub finds no copies sold at auction. A fine copy, with strong impressions, binding with early repairs, early marginal repairs to the front fly-leaf and title. PROVENANCE: Early ownership inscription on the bottom of the title-page. V. Engelshofen with library stamp on the title, number 624. Twentieth century Spanish typed bookseller's description laid in. Piot, E. Catalogue de la bibliothèque de feu M. Eugène Piot. Paris, 1891. pt. 1, no. 365 (The NYPL copy). (Inventory #: 164818)
$18,500.00 add to cart or Buy Direct from
Ursus Rare Books
Share this item
Ursus Rare Books
Offered by