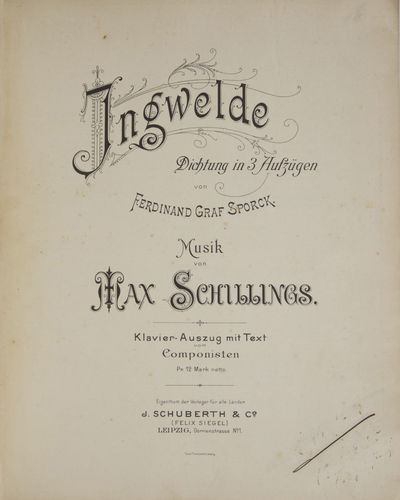 Overpastes with manuscript notation to pp. 35, 45, and 105. Some performance markings and cuts in pencil and blue crayon throughout. Inscription in black ink to lower outer corner of title mostly erased.

Binding slightly worn and bumped at corners; hinges slightly split. Some minor wear and foxing. Several bifolia partially or fully detached; some staining and bleeding relative to overpastes and, to a lesser extent, staples at gutter; some erasures. First Edition. OCLC no. 27237798.

Ingwelde was first performed in Karlsruhe at the Hoftheater on November 13, 1894.

"Although Schillings's earliest efforts at composition were concentrated towards songs, chamber and orchestral music, opera remained his major preoccupation. This first opera was Ingwelde, a music drama based on a poem by Count Ferdinand von Sporck, which recounts the Scandinavian Svarfdälasaga in Zedlitz's Altnordische Bilder. First performed in Karlsruhe in 1894 under Felix Mottl, initially it was greeted with critical approval and received further performances under Strauss in Munich in 1897." Erik Levi in Grove Music Online. (Inventory #: 26402)
$135.00 add to cart or Buy Direct from
J. & J. Lubrano Music Antiquarians
Share this item