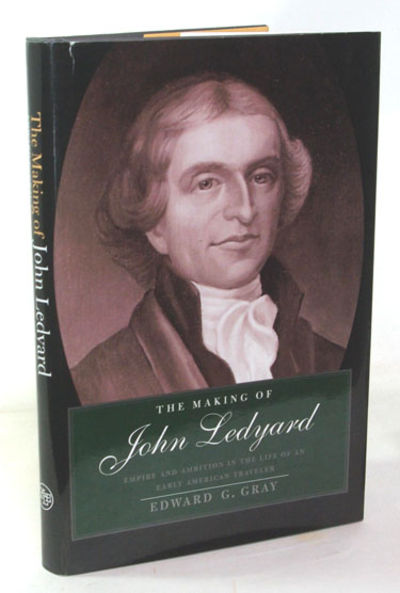 by Gray, Edward G.
New Haven: Yale University Press, 2007. First Edition. Fine in gray paper covered boards with gilt text stamping on the spine. A small quarto measuring 9 1/8 by 6 inches. In a near fine unclipped dust jacket with a 1/4" closed tear at the upper edge of the front panel. 224 pages including an index, chapter notes and text. Illustrated with maps and reproductions of contemporary works of art. A Connecticut native, John Ledyard (1751-1789) lead a remarkable life and one filled with friendships with some of the most influential men of his time. He knew and was influenced by Captain James Cook, Robert Morris, John Paul Jones, Benjamin Franklin, Thomas Jefferson and many others. His penchant for travel not just within the United States but across the world gave him a point-of-view few of his era could appreciate. During the American Revolution he served as a British Marine aboard one of Captain Cook's vessels. During that cruise he was introduced to the Pacific Northwest of what is now Washington and Oregon. He recognized the importance of the fur bearing sea-otter and thereafter did all in his power to return to the area. His bad luck prevented him from completing a journey he had contemplated for years: walking through Russia in 1787/1788 to reach the west coast of North America. (Inventory #: TB29362)
$20.00 add to cart Available from
Town's End Books
Share this item

Sailing Alone Around The World

Chicago : The Lakeside Press , 2017
(click for more details about Sailing Alone Around The World)

n.p. [Chicago] : LSC Communications , 2018
(click for more details about Fanning's Narrative)
View all from this seller>