A Week On The Concord And Merrimack Rivers 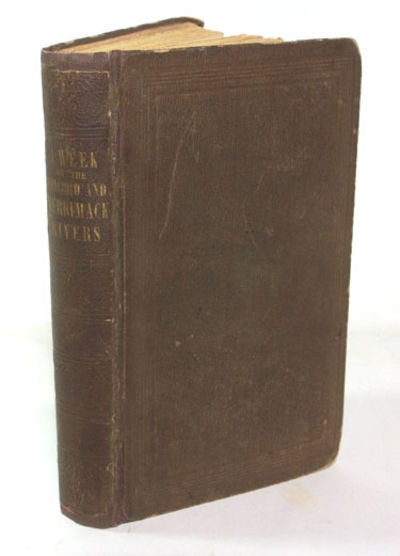 by Thoreau, Henry David
Boston and Cambridge: James Munroe And Company, 1849. First Edition. First and only Printing Very good- in its original, light brown, wavy cloth covered boards blind stamped with a five-rule border on both boards. This copy has been professionally rebacked preserving the majority of the original spine strip and retaining the original end sheets. A small octavo of 7 13/16 by 4 3/4 inches with the cloth worn through at the fore edges of the boards and in sections along the upper and lower edges of the boards. The front hinge is starting and there are occasional marginal pencil marks in the text. Heavy erasures of the front and rear most end sheets have also caused two small holes in those pages. There is a minor tanning to the interior of the facing pages 112 and 113 perhaps from two small leaves having been pressed within the book. Lastly, the page announcing the imminent publication of Walden is missing a 1 1/2 inch chip from its upper fore corner. That chip has no impact on the printed text on that page. 413 pages of text followed by a one page announcement stating Walden "will soon be published". It is important to note that due to a printer's error the last three lines of page 396 are missing. Those lines have been written out in pencil perhaps by the author or the author's sister as indicated in both BAL and Borst. The printer's errors on page 120 and 139 have not been either noted or corrected. This was Thoreau's first book, which he had to pay for to get published. Unfortunately, it did not sell well. From bibliographic sources, we infer that this copy is most likely one of the 256 bound, unsold copies returned to Thoreau in October 1853 by the publisher. In 1862 Ticknor and Fields purchased 145 bound copies and the 450 unbound sheets from Thoreau. During the intervening years Thoreau either gave away or sold 111 of the bound copies. In that time Thoreau discovered the missing lines on page 396. In some of those bound copies either Thoreau or his sister, Sophia Thoreau, and an unknown third individual added the missing lines on the lower portion of that page in pencil. Expert opinion indicates that this handwriting is not that of either Thoreau or his sister. (BAL 20104; Borst A1.1.a1; Howes T-220) (Inventory #: TB29389)
$8,500.00 add to cart Available from
Town's End Books
Share this item

A Week on the Concord and Merrimack Rivers

Avon, Conn. : The Limited Editions Club , 1975
(click for more details about A Week on the Concord and Merrimack Rivers)
View all from this seller>