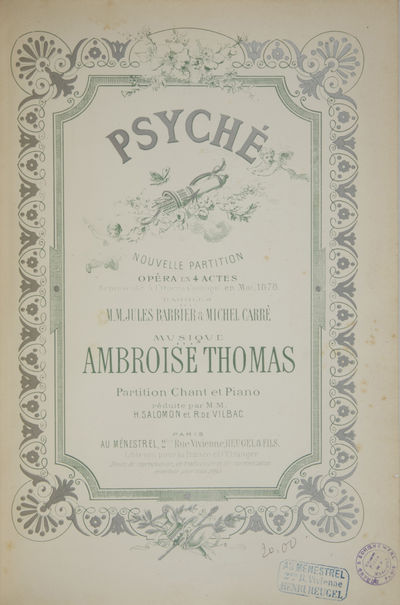 Handstamps of Henri Heugel and Durand & Schoenwerk to lower right corner of title.

"In the late 1850s Thomas became a professor of composition at the Conservatoire and also had responsibility for its regional branches. From this period dates Psyché, which began life as a chamber opera but was first performed as a three-act opéra comique; it was expanded to four acts for performance at the Opéra [-Comique] in 1878."

"After years of neglect, Thomas' work has seen a considerable revival in the last two decades of the 20th century, with major performances, at least of Mignon and Hamlet, being mounted in France, Great Britain and the USA. In the context of French opera of the late 19th century Thomas was a figure of considerable importance, an imaginative innovator and a master of musical characterization." Richard Langham Smith in Grove Music Online. (Inventory #: 25996)
$175.00 add to cart or Buy Direct from
J. & J. Lubrano Music Antiquarians
Share this item