The History of the Rise, Increase, and Progress of the Christian People called Quakers, Intermixed with several Remarkable Occurrences 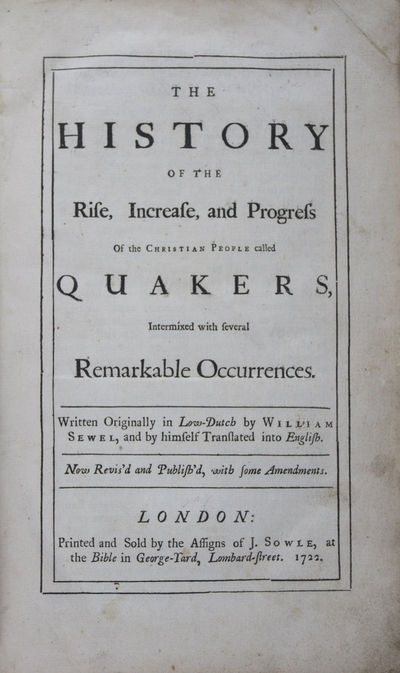 by Sewel, William
London: Printed and Sold by the Assigns of J. Sowle, at the Bible in George-Yard, Lombard-Street, 1722. Ex-Library Second revised. Hardcover. fair to vg. Small Folio. (12) 723 (21)pp. Original three quarter calf over marbled boards with gilt lettering on red leather label of spine; raised band. Housed in custom made red linen clamshell box with gilt lettering on spine. "Written originally in Low-Dutch William Sewel, and by himself Translated into English. Now Revis'd and Publish'd, with some Amendments." (from title page). 1st English edition of the original 1717 Dutch edition. Sewel is said to have worked 25 years on his major work dedicated to George I., King of Great Britain, Ireland and Prince Elector of Brunswick Lunenburg. Sewel's work became the authority on the history of the Society of Friends ("Its accuracy has never been impugned, and it remains a classical authority" DNB) and corrected the misconception established by Gerard Croese's Historia Quakeriana published in 1695. Sewel drew on his own correspondence and the works of Fox (Journal), Lord Clarendon (Rebellion) and Ludlow (Memoirs). Index at rear followed by four page listing of books offered by J. Sowle. Laid in a newspaper cutout of a book review of George Allen's "Gurneys of Earlham," an account of a typical Quaker family. Clamshell box with library bardcode sticker at left upper corner of front cover. Binding with heavy scuffing of leather with some chipping of corners at foredge. Both joints at spine cracked but holding together causing slightly loosened first signature and starting before Sowle's ads at rear. Small exlibris and library stamp on inside front cover. Some staining in the gutter throughout with slight damage from worming at the lower end of gutter. Slight sporadic foxing throughout. Binding in overall fair, interior in good to very good condition. (Inventory #: 43123)
$750.00 add to cart or Buy Direct from
Eric Chaim Kline Bookseller
Share this item