[Pair of pins with anti-Nixon caricatures by David Levine] 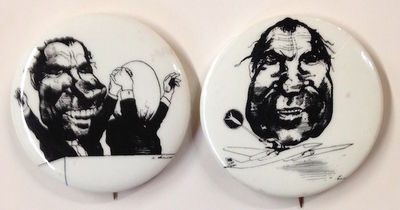 by Levine, David; National Peace Action Coalition (NPAC)
n.p.: NPAC, 1971. Two 1.75 inch diameter pins, both with cartoons by Levine that were originally published in the NY Review of Books. One shows Nixon riding a bomber, with copyright date 1971 on the edge and NPAC#1, while the other depicts Nixon with Agnew, the latter's head an egg, copyright date 1968 on the edge and NPAC#3. Very good. These were issued for the large NPAC occupation of Washington DC in 1971. (Inventory #: 217892)
$20.00 add to cart or Buy Direct from Bolerium Books
Share this item