Pair of Patriotic Memorial Textiles Commemorating the Voyage of the Great White Fleet, 1907-1908 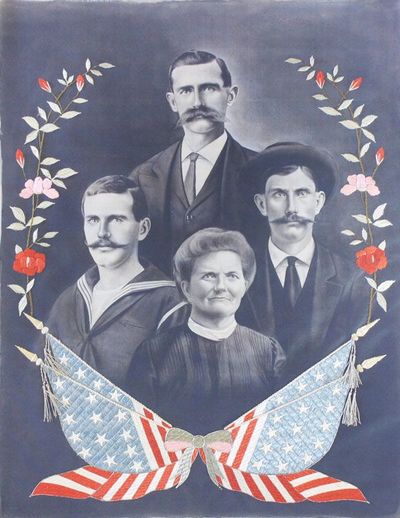 by [U.S. NAVY - GREAT WHITE FLEET] McKEEVER, "Mellie" [J.G.?]
N.p. [Japan?], ca 1907. Pair of large trapunto banners, both removed from original frames. First 82cm x 60cm (ca 32" x 24"); embroidered in silk with trapunto elements on a black silk ground; photographic portrait on cabinet card inserted in embroidered pocket at center, inscribed "Mellie McKeever" on verso. Silk ground fragile, with a few thin tears but no significant losses; light soil; embroidered portions generally well-preserved, and colors bright. Very Good. Second banner 65cm x 50cm (ca 25" x 20"); photo-transfer on silk with embroidered ornaments. Slight fading to embroidered portions, but generally well-preserved and sound; Very Good. Both banners with firm provenance, purchased from the descendants of Mellie McKeever of Richwood, West Virginia. Two exceptional and well-preserved examples of the ornamental trapunto banners that were popular souvenirs among U.S. sailors and marines during the late 19th and early 20th century. Yokohama was the principal point of production for these naval souvenirs, but we have also seen examples from the Philippines and mainland China; Japanese examples (such as these) are generally distinguished by a higher quality of embroidery and more sophisticated composition. The banners became popular among British and American sailors beginning as early as the Boxer Rebellion and the Spanish-American War, but seem to have reached their peak of popularity with the arrival in the Far East of Teddy Roosevelt's Great White Fleet in 1908. Some 14,000 sailors and marines made land at various Japanese ports-of-call in that year, and given the regularity with which these textiles still appear one imagines that every sailor must have brought at least one of these souvenirs home with him.

The first example, though of an unusually impressive size, is of a type frequently seen, displaying typical naval iconography right down to the hand-painted battleship portrait (of a two-stack battleship of the Kearsarge class, its hull painted white reflecting its peace-time mission) at bottom center. The embroidered frame, to hold a cabinet portrait of the sailor or perhaps a loved one, is a typical feature found on more elaborate examples. The American Eagle, in full battle stance, is a nearly universal element of these banners.

The second banner is of a style we have not previously seen and for which we can find no analogues in the extensive literature of naval souvenirs. It is clearly a family portrait, probably a composite made from cartes-des-visites carried by McKeever; the portraits are printed by silkscreen using a photo-transfer process, with applied trapunto decorations. The likenesses are clearly enlarged -- it is highly unlikely that a common sailor would have had room aboard a battleship to carry full-size portraits -- and it strikes us that this must have seemed an almost magical process at the time of creation, especially to a young man from a tiny lumber-and-coal town in central West Virginia.

Aside from their obvious virtues as objects of art and handicraft, we regard these banners as compelling pieces of material culture from a period of tremendous social transformation in the United States. According to the Naval Historical Center, U.S. naval rolls expanded by nearly 400% between the beginning of the Spanish-American War and the launching of the Great White Fleet. To meet this demand, for the first time in its history, the Navy began recruiting from the American heartland rather than solely from the Eastern Seaboard states. The generation of inland farmers and mechanics to follow was thus the first in American history to experience, first-hand, cultures as diverse and divergent from their own as those of Europe, Asia, and the Pacific Islands; they represented not only the beginning of the American imperialist enterprise, but also the first stirrings of America's global consciousness. That so many of these banners have survived in good condition is evidence of the degree to which they were treasured by their owners, for whom they represented an experience that must have been transformative and definitive. (Inventory #: 31197)
$3,500.00 add to cart or Buy Direct from
Lorne Bair Rare Books
Share this item