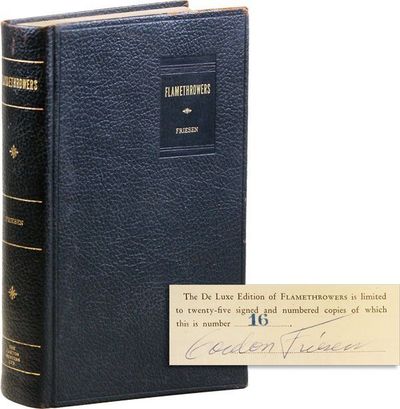 by FRIESEN, Gordon
Caldwell, ID: The Caxton Printers, 1936. First, Limited Edition. Large octavo (24cm). Publisher's morocco-grained leather, stamped in gilt on spine and front cover. One of 25 signed copies of the De Luxe first edition. Light scuffing to board edges,with leather flaked away at corners; still a nicely preserved example, Very Good or better. Excellent copy of the rare De Luxe Edition of the Oklahoma author's first book, a highly autobiographical novel depicting the coming of age of a young man in a Kansas Mennonite community. Friesen broke sharply from his own religious upbringing; during work on the Oklahoma Writers Project (where he formed a life-long friendship with the noted pulp author Jim Thompson) he became radicalized, joined the Communist Party, and broke ties with his family and his Mennonite roots. He would go on, with his partner Agnes "Sis" Cunningham, to edit and publish the long-running and highly influential left-wing folk music journal Broadside which, despite a tiny circulation, remained in print until the late 1980s. Flamethrowers, his first book, is a forgotten high-spot of Oklahoma fiction and one of relatively few American novels to deal critically with the Mennonite faith. Despite critical praise upon publication the book sold very poorly; collection-worthy copies are notably uncommon; the De Luxe edition, limited to only 25 copies, is necessarily rare. This edition not separately catalogued in OCLC. HANNA 1326. (Inventory #: 32469)
$300.00 add to cart or Buy Direct from
Lorne Bair Rare Books
Share this item

The Writer; A Series of Original Essays, Moral and Amusing

by By a Gentleman of Massachusetts" (pseud Gamaliel Bradford)

Boston : Russell & Gardner Printers , 1822
(click for more details about The Writer; A Series of Original Essays, Moral and Amusing)
View all from this seller>