The Man From Limbo 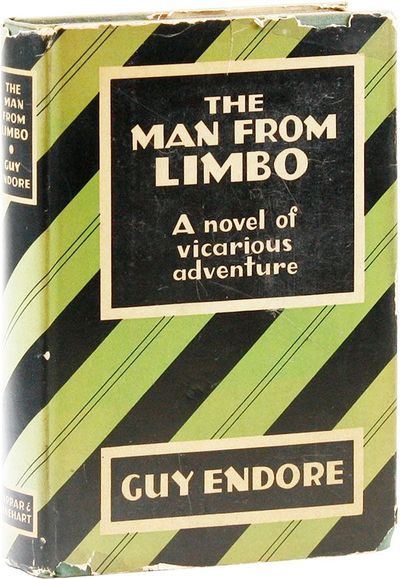 by ENDORE, Guy
New York: Farrar & Rinehart, 1930. First Edition. Octavo (20cm). Blue-green cloth, lettered in navy on spine and front cover; pictorial dustjacket printed in green and black; 296pp. Faint damp-mark at base of spine; board edges a little sunned; still a tight, VG copy in the original unclipped dustwrapper, lightly worn overall with a few shallow chips at extremities, none affecting jacket text; Very Good. Text partially unopened. Endore's first novel, billed as "a novel of vicarious adventure," is a Bleiler-listed fantasy, framed as a novel-within-a-novel, in which the young male protagonist escapes his dreary reality by mental travel through time and space. Of all Endore's novels, this is perhaps the only one to directly address American social and economic conditions. Despite the fact that he was a life-long Communist and wrote the majority of his best-known works during the Red Decade, Endore never toed the party line when it came to his writing; he never published a straightforwardly proletarian novel (1934's Babouk, an historical novel of the Haitian Revolution, being the closest he would come) and he is today best remembered for his classic horror tale, Werewolf of Paris.

Of the present work, we have noted two dustjacket variants, one printed in green only, another (as with this copy) in black and green, without any established priority to our knowledge. BLEILER (Checklist, 1972) p.109. Ignored by Hanna, despite clear social content. (Inventory #: 30539)
$75.00 add to cart or Buy Direct from
Lorne Bair Rare Books
Share this item

Sufferings of Factory-Children. Substance of the speech by Michael Thomas Sadler, Esq. in the House of Commons, Friday, March 16, 1832, on moving the second reading of The Bill to Regulate the Labour of Children and Young Persons in the Mills and Factories of the United Kingdom

by [SOCIETY FOR THE IMPROVEMENT OF THE CONDITION OF FACTORY CHILDREN] SADLER, Michael Thomas

London : Longman and Co [for the Society] , 1832
(click for more details about Sufferings of Factory-Children. Substance of the speech by Michael Thomas Sadler, Esq. in the House of Commons, Friday, March 16, 1832, on moving the second reading of The Bill to Regulate the Labour of Children and Young Persons in the Mills and Factories of the United Kingdom)
View all from this seller>