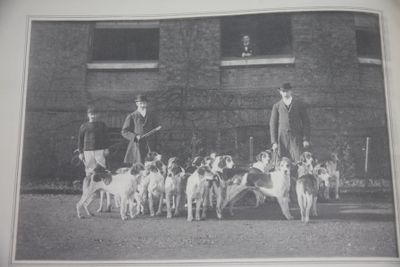 by Rawlinson, Captain and R. J. Marker
Windsor, England: Oxley & Son, 1895. First edition. Half Morocco. . Very Good. Scarce. with no copies found on OCLC First Search. Oblong 4to, 25.5 by 34 cm. [6], 43, [2] pp. 22 plates -- photographs, copies of mostly humorous drawings relating to the account. Not counted as plates -- among the pages that are paginated -- are the final leaves with mounted programmes, menus, invitations relating to the hunts. Drag racing began as a preparatory exercise to train foxhounds, who instead of chasing an actual fox, run after an artificially laid scent, one carried by a person bearing a material soaked in a pungent aniseed or other smelly substance. By the mid-nineteenth century had become a sport in its own right. Because the sport isn't dependent on the vagaries of the fox, it is more controllable by the master running the show, and thus can be more consistently fast-paced, if that is the objective. Among its greatest enthusiasts became members of the British army and cavalry. Drag hunts remain a fixture to this day in foxhunting country, including in the United States. This account of a season of drag hunts is rendered in a chatty, propulsive narrative similar to many a foxhunting reminiscence. The latter, though, is a staple of sporting literature, whereas we believe that drag hunting has seldom received such treatment, other than as part of, and ancillary to, a foxhunting memoir. Binding is heavily rubbed or abraded. Generally a clean interior, and overall, a tight copy. (Inventory #: 005771)
$650.00 add to cart Available from
White Fox Rare Books & Antiques
Share this item
White Fox Rare Books and Antiques
Offered by