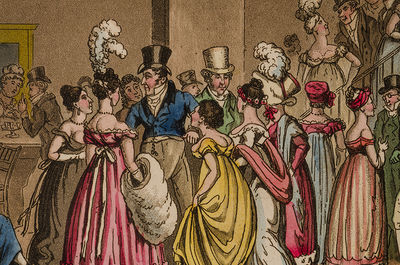 "By finding the right men [the Cruikshanks] for his work [Egan] made Life In London one the great successes of the day, comparable to that other triumphant alliance of humour and art in the pages of Dr Syntax" (Prideaux).

"A journalist, and a well-known character in his day, [Pierce Egan] wrote nothing so popular as this Life in London. Indeed, the taste for it amounted to a craze. For his illustrations, Egan went to two brothers, Isaac Robert and George Cruikshank...the success of the work was so great that the artists could not colour the engravings fast enough for the demand. It suited the taste of the time, when a ‘fast' life had become a sophisticated and conscious aim. Life in London is a guide to a fast life.... Part of the success enjoyed by [Pierce Egan's Life in London] was due, no doubt, to its readers' belief that they could name the originals of the fictitious characters. Imitations came swift and frequent..." (The Cambridge History of English and American Literature ).