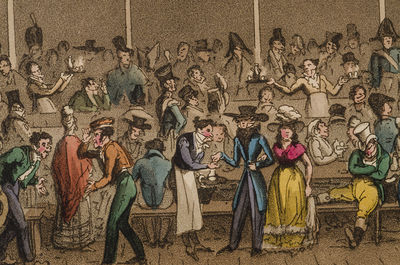 first edition
by CRUIKSHANK, George, illustrator; CAREY, David
London: Printed for John Fairburn...Sold by Sherwood, Neely, and Jones [et al], 1822. Life, Wherever it Exists in the Shape of Human Character,
Is Prolific of Events, and Full of the Materials of Amusement..."

[CRUIKSHANK, George, illustrator]. CAREY, David. Life in Paris. Comprising the Rambles, Sprees, and Amours, of Dick Wildfire., of Corinthian Celebrity, and His Bang-Up Companions, Squire Jenkins and Captain O'Shuffleton; With the Whimsical Adventures of the Halibut Family; Including Sketches of a Variety of other eccentric Characters in the French Metropolis. London: Printed for John Fairburn... Sold by Sherwood, Neely, and Jones [et al], 1822.

First edition, early issue, bound without the half-title and the "To the Binder" leaf at rear.

"One of the best imitations of Pierce Egan's Life in London, 1821... which had plates by Robert and George Cruikshank, the plates in this work being by George only. The frontispiece or engraved title here is similar in conception to that of Life in London" (Abbey, Travel).