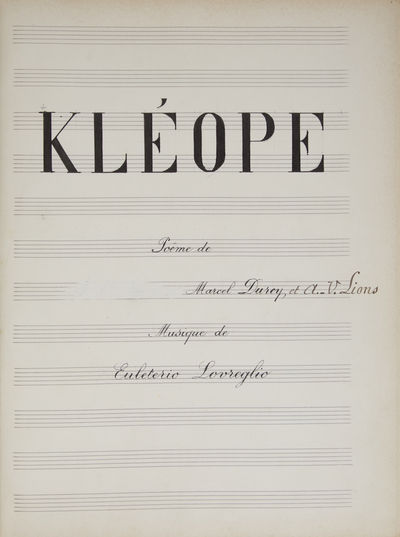 Characters in the opera include Amasis (King of Egypt), Béréel (his servant), Hemblond (a steward at the palace), Ali (guardian of the Temple of Venus), Rhodope (a courtesan), Nofré (her servant), the Pharoah, and various additional servants, courtesans, etc.

The action takes place in Memphis, Egypt, ancient capital of Aneb-Hetch, the original name of Lower Egypt, in 500 B.C.

With notation in black; part identifications, performance notes, and occasional notation in red; and text in green ink. With descriptions of each act and the ballet preceding music.

Lovreglio was a composer, conductor, and musicologist. Born in Naples, grandson of the flautist and composer Donato Lovreglio (1841-1907), he died in Nice. Lovreglio played the violin at La Scala under Toscanini from 1917-1919, at which time he emigrated to France, teaching at the Collège Parc Impérial in Nice from 1940-1945; among his students was the Armenian composer Levon Arami Astvatsatrian (born 1922). He wrote two operas, three ballets, stage music, two masses, and symphonic and chamber music.

The present work is not included in Lovreglio's works list in Wikipedia.

There is a center named for him in Celano, the Centro Europeo di Studi Musicali "Eleuterio Lovreglio. (Inventory #: 29544)
$748.00 add to cart or Buy Direct from
J & J Lubrano Music Antiquarians
Share this item

Signed photograph of the noted American violinist and music educator

Before the Ballet. Drypoint by noted German Impressionist painter and etcher Ernst Oppler (1867-1929)

1915
(click for more details about Before the Ballet. Drypoint by noted German Impressionist painter and etcher Ernst Oppler (1867-1929))
View all from this seller>