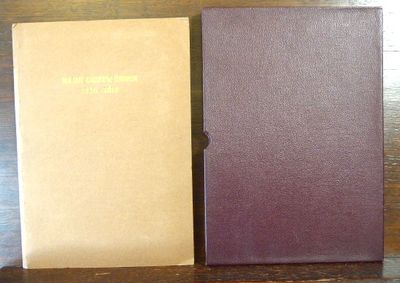 by McCLURE, MEADE L
Privately Printed, 1919. Front cover lettered in gilt. Several full-page illustrations through text. Portrait frontispiece with tissue-guard. A sketch prepared and read by the author before the Missouri Valley Historical Society, May 31, 1919. Major Drumm (1828-1919) was a prominent cattle rancher and Kansas City businessman. He ran the 150,000 acre U Ranch near Burlington, Oklahoma (Burlington was once known as Drumm). He later established the Andrew Drumm Institute in Independence, Missouri. It became known as the Drumm Farm Center for Children, a home and working farm for orphaned or disadvantaged boys. 41pp. Herd 1378.. First Edition. Heavy Brown Wrappers. Minor Edge Wear/Custom Slipcase. Thin Octavo. (Inventory #: 014352)
$125.00 add to cart Available from Glenn Books
Share this item
Glenn Books
Offered by

THE LIFE OF SIR WALTER SCOTT

A SET OF SIX BOOKS

London : George Routledge , 1900
(click for more details about A SET OF SIX BOOKS)
View all from this seller>