Naval Achievements of Great Britain from the Year 1793 to 1817, The 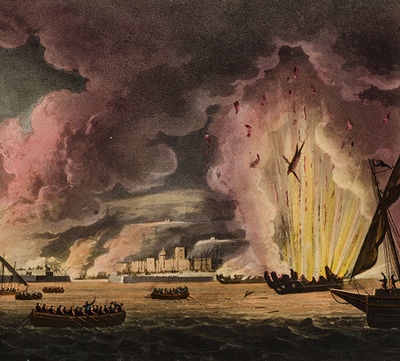 Contemporary half red roan over marbled boards. Spine with five double raised bands, ruled in blind and lettered in gilt in compartments. Armorial bookplate of William Hutton on front paste-down.

A large and tall example (Abbey's copy measured 13 1/8 x 10 5/8 inches). In this copy, which is a first issue with pre-publication watermarks throughout, the engraved-title vignette is colored. This is quite unusual with early issues as all the literature states that only later issues had the title vignette colored.

"As in the "Martial Achievements" there are late issues of the plates which must be examined to see that the watermarks are pre-publication. Some copies of this work have one or two additional plates, namely portraits of Nelson and Lord St. Vincent. The work is complete without them. Copies were issued with the plates on India paper and also in etched outline. Some large-paper copies have the plates in three states. More sought after than the Martial Achievements, it is becoming uncommon". (Tooley p. 234-5).

"Collectors should note that evidence of early state in this book can be found in the title-page vignette, originally issued uncoloured, and coloured only in later issues. The book was reprinted as late at 1840, copies having been seen with watermarks of the date." (Abbey, Life. p. 287). Abbey's copy measured 13 1/8 x 10 5/8 inches.