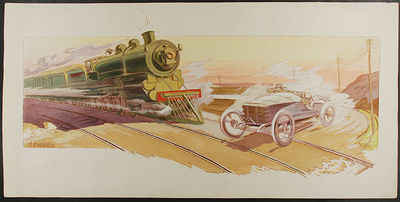 by GAMY MONTAUT
Paris: M.M., 1910. Hand-coloured pochoir print. Very good condition. The Vanderbilt Cup began on Long Island in 1904, modeled after the European long distance races. The race was supported by the local elite and the fledgling AAA, while it was opposed by farmers, politicians and the local press. Eighteen competitors took part in the first race.

The Gamy-Montaut prints document various historical events in the early history of motorized transportation, including Power Boat Racing, Motorcycle and Motor Car Racing, Motor Car Touring, Zeppelins and Airplanes. Having observed the rapidly growing interest in cars and racing during the early years of motor cars, Ernest Montaut produced his first motoring prints in the mid-1890s, and by 1897, his drawings were pictorial records of the many races in France. Montaut's work was extremely well received in the Paris of his day and was shown in the fashionable shops of the Rue de l'Opera and Rue de la Paix, as well as in the better galleries. Marguerite Montaut, Ernest's wife, joined him in his work producing not only racing prints but also developing a fine series of aviation prints commemorating such events as the first flights on the early European mail routes. While Marguerite Montaut's works were occasionally signed "M. Montaut", she also used the name "Gamy", an anagram for Magy. The Gamy-Montaut prints were all produced by the pochoir process in which the outlines for each image were drawn onto lithographic stones and printed. Using these uncoloured prints as a template, elaborate stencils were cut for each colour. Water-colour was then brushed onto the image through the stencil. The colouring process was quite complex, with each print taking several days to produce. It was also quite labour intensive, and the studio of Gamy-Montaut therefore employed a group of trained artists, including Nevil and Campion, to assist in the colouring. (Inventory #: 23642)
$1,750.00 add to cart or Buy Direct from
Donald A. Heald Rare Books
Share this item
Donald A. Heald Rare Books
Offered by