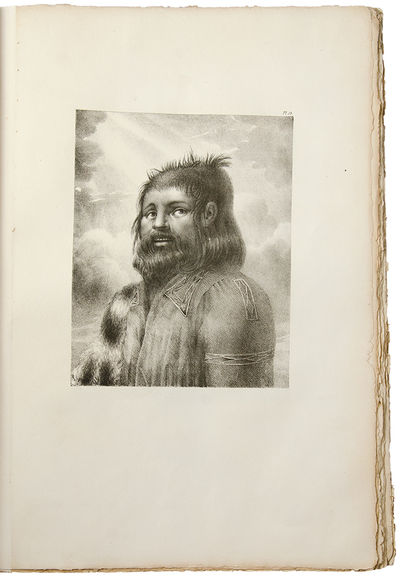 First edition in French of Krusenstern's seminal account of the first Russian expedition to circumnavigate the globe: complete with the rare atlas of plates.

Capt. Ivan von Krusenstern's voyage was one of the most important post-Cook Pacific voyages, specifically aimed at obtaining more knowledge of the northern Pacific region, establishing diplomatic and commercial relations with Japan, and visiting the Russian trading posts in Alaska and on the west coast of America. It comprised the first Russian expedition to circumnavigate the globe, under the command of Krusenstern, between 1803 and 1806. Sailing in 1803, the expedition touched on Brazil and rounded Cape Horn, visiting the Marquesas Islands, Hawaii, Kamchatka, and Japan. In Hawaii the expedition separated, with ships under Langsdorff and Lisianski sailing to the Northwest Coast, while Krusenstern himself undertook the delicate Japan expedition, returning via Macao and the Cape of Good Hope. "The importance of this work stems from its being the official account of the first Russian expedition to circumnavigate the globe, and form the discoveries and rectifications of charts that were made, especially in the North Pacific and on the northwest coast of America" (Hill). First published in St. Petersburg between 1809 and 1814, with issues in both Russian and German, that first edition with its folio atlas of 105 plates is a major rarity of travel literature. Dutch, English and Italian editions followed, although none contained an atlas of plates. The present first edition in French is the first edition following the original publication to include an atlas of plates. The images are re-engraved versions of images in the original, and includes a portrait of Krusenstern, views and images of natives of the Marquesas, Japan, Sakhalin Island, Kamtchatka, etc., as well as nine maps of various Pacific regions visited.