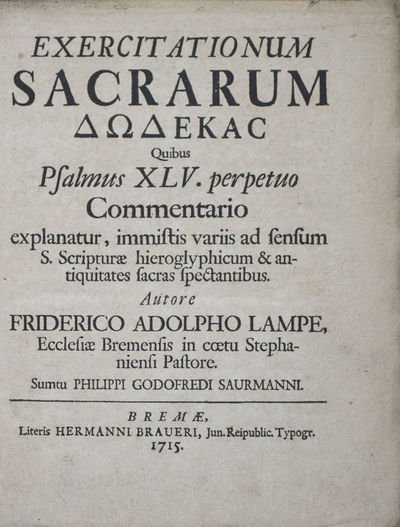 by Lampe, Friderico Adolpho (Friedrich Adolph Lampe)
Bremae: Hermanni Braueri, 1715. First edition. Hardcover. poor to vg. Quarto (9 x 7"). 626, [26]pp (Index and Addenda). Contemporary half calf over marbled paper covered boards. Decorative head-, and tailpieces. Book housed in a modern orange cloth covered clamshell box, with gold lettering to spine. First edition of Friedrich Adolph Lampe's commentary and exercitations on Psalm 45, a wedding song, or epithalamium, written to a king on the day of his wedding to a foreign woman. The Psalm consists of two sections framed by an introduction (vss. 1-2) and final blessing (vss. 17-18). Verses 3-10 enumerate the virtues of the king, while verses 11-16 describe the queen's wedding procession and urge her to forget her family and her own country and to submit to her husband. In verse 3, the poet tells the king that "God has blessed you from eternity," a concept taken by some to imply predestination. The most controversial passage is verse 7 (6 in the RSV), traditionally translated "thy throne, O god, is for ever and ever," because it seems as if the poet is addressing the king as "god," which is theologically problematic. Alternate translations include "your divine throne endures for ever and ever" and "the eternal and everlasting God has enthroned you." The last two verses of the psalm assure the king that he will have a long line of descendents and "peoples will praise you from age to age." It is a Psalm by the "sons of Korah" and represents a song for the wedding of the king. The sons of Korach, to which the psalm is attributed in the 1st verse, were probably a race of temple singers. Psalm 45 is the only example of profane poetry in the Psalms and was composed and sung by a minstrel or cult prophets on occasion of the marriage of the king. The Psalm covers the five following parts: 1) Verse 1-2: Introductory Self-Presentation of the singer 2) Verse 3-10: portrayal of the king in all his properties and in his power and wealth 3) Verse 11-13: Addressing the Bride of the King 4) Verse 14-16: Description of the bride 5)Verse 17-18: completion of the song with the encouragement of a promise to the king and his descendants Heavy rubbing on binding, with abrasion to leather and calf. Head and tail of spine chipped. Closed tears along joints. Ex-library bookplate on inside of front cover. Previous owner's name and signature at upper part of front free endpaper. Front free endpaper partly loose. Minor and sporadic age-toning throughout. Text in Latin, with some Hebrew and Greek. Clamshell box in overall very good, binding in poor to fair, interior in good to very good condition. About the author: Friedrich Adolph Lampe (1683-1729) was a German Pietist pastor, theologian and professor of dogmatics in Utrecht (1720-1727) and Bremen (1727-1729). He was a Cocceian, and follower of Johannes d'Outrein. He is known as the first Pietist leader from a Calvinist rather than Lutheran background. (From Wikipedia). (Inventory #: 43198)
$350.00 add to cart or Buy Direct from
Eric Chaim Kline Bookseller
Share this item