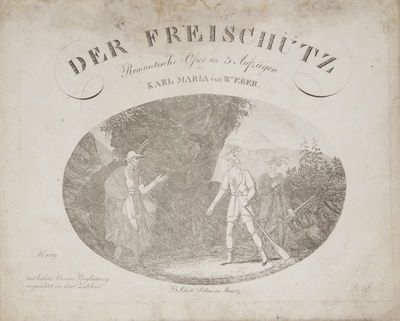 Text added in pencil to many leaves.

"With the overwhelming success of his opera Der Freischütz in 1821 [Weber] became the leading exponent of German opera in the 1820s and an international celebrity. A seminal figure of the 19th century, he influenced composers as diverse as Marschner, Mendelssohn, Wagner, Meyerbeer, Berlioz and Liszt..."

"... Der Freischütz was the culmination of an important phase in Weber's struggle to realize his conception of German opera. His idea of combining the resources of drama, music and the visual aspect of theatre in a unified art work was only partly realized in Der Freischütz; but, owing much to the example of French opera, he moved far beyond the limitations of Singspiel as it was practised by the majority of his German contemporaries." Clive Brown in Grove Music Online. (Inventory #: 29541)
$110.00 add to cart or Buy Direct from
J. & J. Lubrano Music Antiquarians
Share this item