REMINISCENCES OF SERVICE WITH THE FIRST VOLUNTEER REGIMENT OF GEORGIA, CHARLESTON HARBOR, IN 1863... 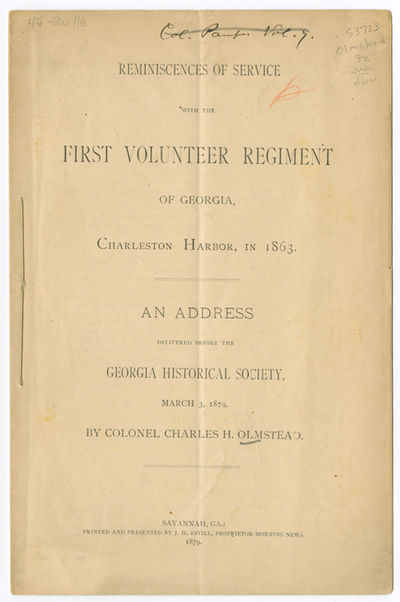 by Olmstead, Charles H., Col.
Savannah, 1879. 15pp. Original self-wrappers, stitched. Some toning, contemporary ownership signature on titlepage, soft vertical center crease throughout. Very good. Colonel Charles H. Olmstead records his own Confederate Civil War service, delivered as an address to the Georgia Historical Society on March 3, 1879. Col. Olmstead served at Fort Pulaski before being captured and confined at Fort Columbus in 1862. After being released via a prisoner exchange, Olmstead served at Charleston in 1863. "In this record of military service confined to the Charleston harbor region, Olmstead gives some attention to his trip over the Charleston and Savannah railroad from Savannah to Charleston, and to a description of Morris Island" - Coulter. COULTER 352. DE RENNE 781. NEVINS 140. (Inventory #: WRCAM53723)
$375.00 add to cart or Buy Direct from
William Reese Co. - Americana
Share this item

[Aboard the HMS Tonnant, off Apalachicola, Fl ca. December 5, 1814].
(click for more details about [AUTOGRAPH MANUSCRIPT DRAFTS OF TWO ADDRESSES BY REAR ADMIRAL EDWARD CODRINGTON TO THE "BRAVE CHIEFS AND WARRIORS OF THE CREEK AND OTHER INDIAN NATIONS," IN HOPES OF OBTAINING THEIR AID AGAINST THE AMERICANS])

Honolulu : Press of the Am. Mission , 1845.
(click for more details about MY FIRST BOOK OF READING AND SPELLING)
View all from this seller>