HOUSE OF REPRESENTATIVES, No. 278...A BILL TO BE ENTITLED AN ACT TO AUTHORIZE THE 2d AUDITOR OF THE TREASURY...TO TAKE PROOFS AS TO THE EXPENDITURES OF THE STATE OF TENNESSEE, IN CONSTRUCTING MILITARY DEFENCES AND THE SUPPORT OF HER ARMY PREVIOUS TO ITS TRANSFER TO THE CONFEDERATE GOVERNMENT 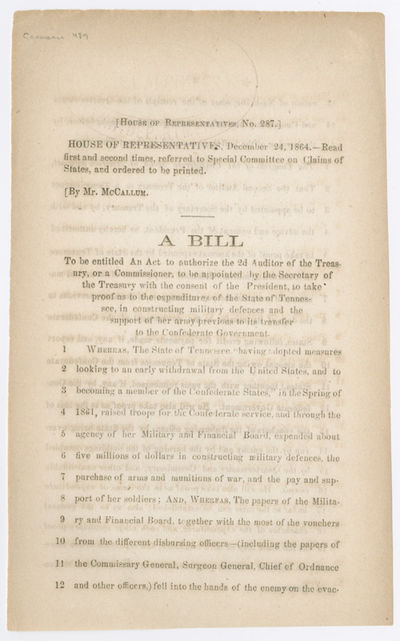 by [Tennessee]: [Civil War]
[Richmond, 1864. 2pp. Minor toning to edges, very faint ink stamp of the Rebel Archives on first page. Very good. An interesting slip-bill seeking to authorize the Confederate treasurer to take account of Tennessee's military expenditures since their "early withdrawal from the United States." Apparently, the state of Tennessee was seeking reimbursement for military expenses and also for the loss of disbursement vouchers that resulted from Tennessee "being overrun by the enemy and by the burning of the buildings occupied by the Quartermaster and Commissary, and other unavoidable causes." The bill was put forth by James McCallum, who represented Tennessee in the Second Confederate Congress. Like many others around the end of 1864, McCallum must have seen the writing on the wall, and tried to get back as much money for his state as possible, as the war, and thus the Confederacy, ended just about four months later. Parrish & Willingham locates numerous copies in institutions, but it rarely surfaces in the trade. PARRISH & WILLINGHAM 754. (Inventory #: WRCAM53699)
$225.00 add to cart or Buy Direct from
William Reese Co. - Americana
Share this item