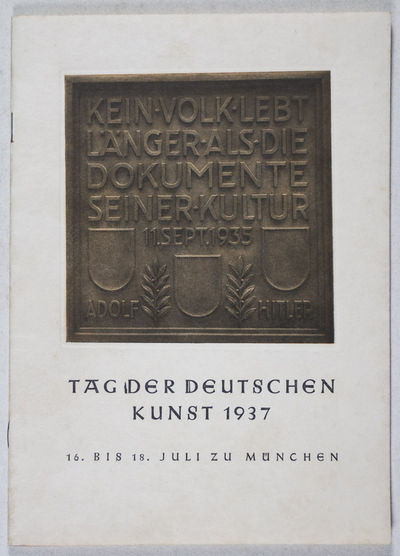 by Leitung der Deutschen Kunst München 1937
München: Knorr & Hirth, 1937. First edition. Softcover. g+ to vg. Small Quarto. Unpaginated, 24pp. Original illustrated cream wraps with black lettering on cover. Program of the festivities from Juli 16-18, 1937, plus farewell evening for artists at the Hofbräuhaus on July 20. The centerfold (in gilt lettering) announces the dedication of the Haus der Kunst and the opening reception of the Great German Art Exhibition with Adolf Hitler slated to speak and contributions by the NS-Reichs Symphony Orchestra and the City Choir of Augsburg. The program announces the grand opening of the Day of German Art on July 16, the reception of the foreign press, the gala performance of "Tristan and Isolde" at the Nationaltheater, the performance of "Don Giovanni" at the Residenztheater and "Minna von Barnhelm" at the Kammerspiele im Schauspielhaus. Saturday July 17th is reserved for various art conferences, the performance of Aida and concerts featuring Beethoven's Ninth Symphony as well as symphonies by Bruckner and Schubert plus various choirs at different locations around town. On Sunday, following Hitler's speech, the parade celebrates 2,000 years of German art and Richard Strauß' Der Rosenkavalier is given at 8 p.m. at the Nationaltheater. Simultaneously to the opera various festivals and dance nights are announced at different locations around town. Text in German. Wraps lightly rubbed and minor foxing. Wraps in overall good+, interior in very good condition. From the estate of Prof. Dr. Richard Suchenwirth (1896-1965), historian and co-founder of the Austrian NSDAP. (Inventory #: 42921)
$450.00 add to cart or Buy Direct from
Eric Chaim Kline Bookseller
Share this item