Cistineae. The Natural Order of Cistus, or Rock-Rose 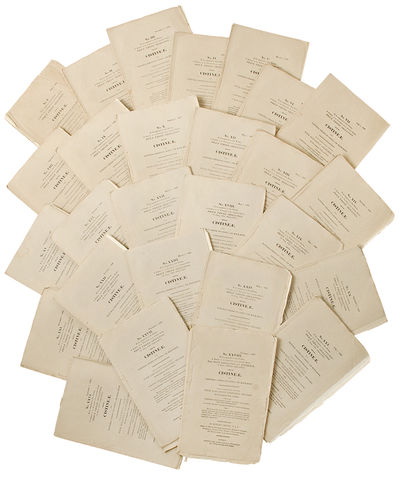 First edition in the very rare original parts of Sweet's highly decorative practical guide to the cultivation of the Rock-rose or Cistus: one of the most beautiful family of flowering plants then available.

Cistus species are upright evergreen shrubs, having mostly pink or purple flowers, which resemble roses. Originally published in 28 parts, at three shillings per part, between July 1825 and January 1830, each plate shows a single variety of Cistus or Rock-rose and is accompanied by text giving a taxonomic description and instructions for the plant's cultivation. In the years following completion, the work was reissued as a single volume, however sets of the first edition in the original parts, as here, are very rare. Robert Sweet "was born in 1783 at Cockington, near Torquay, Devonshire. When sixteen years old he was placed under his half-brother, James Sweet, at that time gardener to Richard Bright of Ham Green, near Bristol, with whom he remained nine years. He subsequently had charge of the collection of plants at Woodlands, the residence of John Julius Angerstein ... In 1810 Sweet entered as a partner in the Stockwell nursery, and when that was dissolved in 1815, became foreman to Messrs. Whitley, Brames, & Milne, nurserymen, of Fulham, till 1819, when he entered the service of Messrs. Colvill. While in their employ he was charged with having received a box of plants knowing them to have been stolen from the royal gardens, Kew, but was acquitted after trial at the Old Bailey on 24 Feb. 1824. In 1826 he left the Colvills, and till 1831 occupied himself almost wholly in the production of botanical works, while still cultivating a limited number of plants in his garden at [Pomona Place] Parson's Green, Fulham. In 1830 he moved to [Cook's Ground, King's Road] Chelsea, where he had a larger garden and cultivated for sale to his friends... He died on 20 Jan. 1835... He had been elected a fellow of the Linnean Society on 14 Feb. 1812. The botanical genus Sweetia was named in his honour by De Candolle in 1825" (DNB).