A Tale of Two Cities...With Illustrations By H. K. Browne. 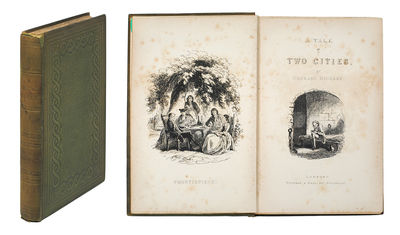 by Dickens, Charles.
8vo. London: Chapman & Hall, MDCCCLIX (1859). 8vo, [ix], [1]-254, 16 etched plates including frontis and title vignette. Full olive green fine-diaper cloth, entirely stamped in blind with a three line border which encloses a rectangular frame within which is is an ornament of leaves and stems in each corner and a chain-like design with each link enclosing a four-leafed flower. Housed in a green cloth slip-case. The head and tail of the backstrip are very slightly bumped with some sun toning; minor scattered foxing mostly near plates and some off-setting; a good clean copy in a beautifully preserved original cloth binding. § First edition in the rare secondary green cloth binding. Two of the eight internal flaws identified by Smith as necessary for the first issue have been corrected: “l” and “f” are printed on p.116 and 213 is numbered correctly. Of the latter point Eckel observes “The absence of this error does not invalidate a first edition but it fixes the priority of printing” and Smith concludes “this binding is probably of a later state than the red morocco [cloth] one”, i.e. second issue. “When Dickens began the publication of All the Year Round, the successor of Household Words, he realized the necessity of making a strong start. So he began writing A Tale of Two Cities, publishing the first of the serial in the opening number of his new periodical... As a novel of great popularity it probably ranks next to Pickwick and Copperfield” (Eckel 87). This was the last novel in which Dickens worked with “Phiz” after a partnership of 23 years, and was published on commission through the renewed partnership with Chapman & Hall. Podeschi A143. Thomson 89. Smith I, 13. (Inventory #: 108356)
$15,000.00 add to cart or Buy Direct from
John Windle, Bookseller
Share this item

New York : Whittlesey House , 1943
(click for more details about Roundup Time. A Collection of Southwestern Writing.)
View all from this seller>