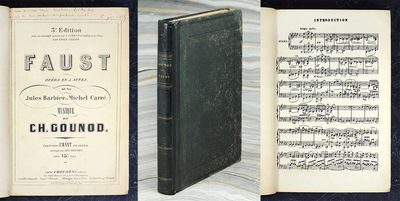 by Gounod, Charles.
4to. Paris: Choudens, [1861]. 4to. [iv], 248 pp., lithographed piano-vocal score. Contemporary rebacked quarter black morocco, black cloth boards paneled in blind, backstrip lettered and ruled in gilt, marbled endpapers. Corners bumped and frayed, some discoloration to boards, otherwise very good. The title-page has an ink inscription signed by the composer. § Third edition, first issue. Opera in five acts, libretto by J. Barbier and M. Carre, first performed (as an opera comique with spoken dialogue) on 19 March 1859 at the Theatre-Lyrique, Paris. The recitatives were added for a production at Strasbourg in April 1860, and a piano score of the opera version was published that year. The present score, published (according to Hopkinson) in 1861, has added tempo markings and shows a cut from the Choeur de sorcieres in Act V. The libretto by Barbier and Carre is based on Goethe, but focuses on the love story between Faust and Marguerite. Loewenberg, 939. (Inventory #: 106399)
$600.00 add to cart or Buy Direct from
John Windle, Bookseller
Share this item