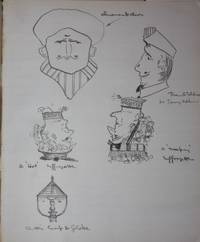 by Andrew, William
Sheffield, England. Quarter Leather. Very Good. Circa 1911, based on clipped entries from "L'Illusioniste", published by Manson Caroly, Paris. 8vo. 23 by 19 cm. 93 paginated leaves, with content almost entirely on rectos, and occasional vignette illustrations or mounted "newspaper" photo clippings on facing versos. Textual content solidly contained on leaves numbered up to 63, then a number of blanks, and then 16 pages of illustrations (vignettes) starting from other end and rendered upside down in relation to the pagination, with these illustrations applied to both rectos and versos. In a sense, then, this is like two separate notebooks kept by one person -- not that uncommon an arrangement in personal notebooks, though, we would observe. So beginning with what we will call the primary text, it expounds on "Drawing Room Tricks" in a very legible hand, with occasional illustrations, most of which are done in pencil, or cut-out photographs. Tricks include "Spin a penny by 'electricity'", a "vanishing penny", "a weird orange", a "card pass", a "three card trick", a "mysterious suspension of a glass of water", a "coin candle", a "realistic production of a handkerchief from candle flame", "passe passe Billiard balls", "smart production and vanish. of cards", a "bottle and card trick", a "cylinder and egg trick", "handkerchief and ball passe passe from hand to hand", etc. The notes sometimes separately break out requirements, an explanation and/or presentation. Near the end of this section is one typed and mounted trick: the "spirit collar act". Vignette illustrations include cards, a bottle, a candle, etc. On to the other side of the notebook -- the heavily illustrated portion -- this is devoted to visual gags. By this we mean within the illustrations are the gag -- these are not tricks to be performed. Serving as a fine example is the very first illustrated page of this section, which presents four metamorphic heads. If you flip the book upside down, revealed is a new head for each example. One way, you see a soldier's head; the other, a donkey's. On another page, Andrew plays with a man and a woman's facing profiles, with the outline of their heads forming an elaborate drinking cup, say. Elsewhere, there is an illustration that can be an electric lamp or a human head, depending on how one looks at it. In yet a different vein, there are a few heads and bodies created from the placement of various musical notation. This is not an exhaustive list of the gags; rather, we are attempting merely to impart an idea of what this section is about. We would add that it seems to us that Andrew is experimenting or working out visual jokes. Finally, we would mention that Andrew lists, with addresses, five magic periodicals of the day. Andrew was an editor of various magic periodicals and a publisher of "Scaratika", a periodical for the Sheffield Circle of Magicians, and "The Conjurer", the official organ of the British Society of Associated Magicians. Condition: leather loss at lower spine extremity. Scattered soiling. (Inventory #: 005850)
$1,250.00 add to cart Available from
White Fox Rare Books & Antiques
Share this item
White Fox Rare Books and Antiques
Offered by