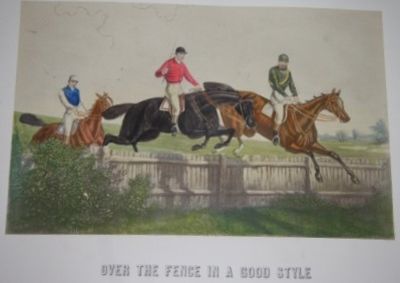 Berlin: Sporting Gallery von F. Otto Beyer. Very Good. Collection of 37 mounted colored illustrations, some colorized photos from life, others, copies of artwork, which would generally appear to be not photographic copies of the originals but rather looser painted copies of them. The subject matter, notwithstanding the title on the outer portfolio, is not just foxhunting, but also, horseracing, including steeple chasing. N.d., circa 1880. (Race horses shown are born in the mid-1870s, and one, a victor in the 1879 Norddeuschen Derby zu Hamburg in 1879). Outer case, 37 by 54 cm, plates, 36.5 by 53.5 cm. 23 plates relate to foxhunting, 14, to horseracing. The use of English, as in "Sporting Gallery", was not so much about selling to English tourists as much as a manifestation of the newly unified Germany's fascination and envy of English culture and more specifically, an attempt to capitalize on the German association of equestriana with England and a romanticization of this aspect of English culture, something glorified in the works of Surtees and other English sporting writers. The photos of actual life would seem inherently more interesting than the reproductions of paintings, yet we would maintain that the latter should not be dismissed as inconsequential aesthetically. The reproductions here are not like photocopies; Beyer is adapting from the source artwork, and the result is something that can depart from it in interesting, and appealing, ways. So using the plate entitled "Whoo--Whoop", whose source we could identify as a painting by William H. Hopkins, the Beyer version has a folk art-ish charm all its own, and if one lines up the copy with the original, one will in fact see subtle differences in detailing that almost suggest that the copy was based on a staging of the painting, as opposed to a direct copy of the painting. The number of plates, 37, might suggest incompleteness, but we don't believe there would be anything that could be considered a complete set. We think it likely that Beyer had a storefront which sold the plates individually or in groupings selected by the buyer. This set, then, was assembled by a Beyer customer. It is obviously a very large selection of Beyer's offerings available at the time. And since the portfolio folder seems filled to capacity, it is inconceivable that there is much, if any, attrition in the number of plates in the initial collection. Since we believe relatively few Beyer plates are extant today, this collection can be viewed as about as diverse and deep a collection of Beyer plates as one is bound to come upon. Folder: red cloth, blindstamped, gilt lettering and gilt and black decoration, interior lined with patterned paper. Condition: moderate age toning. Some brittleness to the card stock used, and so a few chips in the margins. The folio folder has a moderate amount of wear. (Inventory #: 005606)
$3,500.00 add to cart Available from
White Fox Rare Books & Antiques
Share this item
White Fox Rare Books and Antiques
Offered by