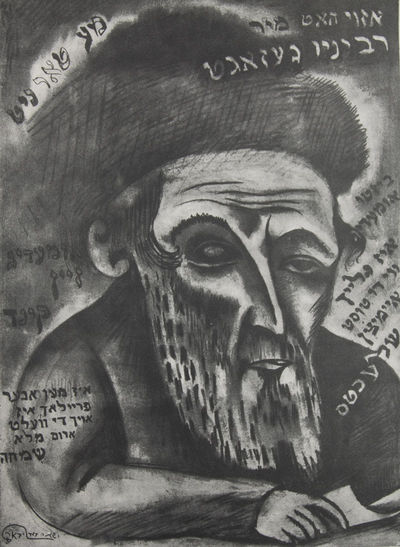 Ryback's powerful images were created as a memorial to the Jewish villages ("shtetlekh") - including his hometown - that were destroyed in pogroms in the aftermath of the disastrous WWI campaign and the Russian Civil War. They depict the peaceful daily life of a traditional Jewish shtetl before the upcoming destructions and massacres: a city street, the artisans (including a shoemaker, a tailor and a knife-sharpener), musicians, the market, the synagogue, a wedding, a funeral, the Jewish cemetery, the rabbi and the Hasidic rebbe. The images here show Cubist and Expressionist influences, and are in many instances reminiecent of the work of Marc Chagall, but are more solemn in tone overall.

The lithographs measure 10 3/4 x 15", and are all dated 1917 in the stone. Of the 30 half-tone plates (Title + plates numbered from III-XXXI), four are printed in bistre, and the others in sepia or black. This copy does not contain the list of plates at the rear.


Front cover rubbed along edges, with some abrasion to velvet. Spine partly frayed. Discoloration to front cover, and edge toning along edges of back cover. Tip of lower corners throughout slighly creased (not affecting plates). One foxing stain at lower left corner of illustrations in plates 16 to 19. Title and captions in Yiddish. Binding in overall fair to good-, interior in good+ to very good, lithographs in good+ (plates 16-19) to very good condition. (Inventory #: 43244)
$3,000.00 add to cart or Buy Direct from
Eric Chaim Kline Bookseller
Share this item