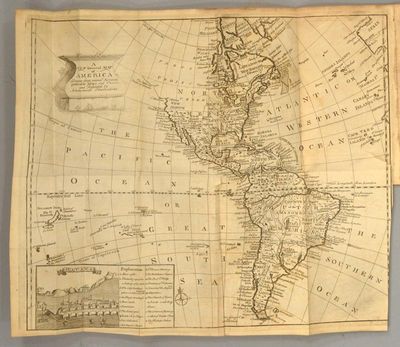 by CAMPBELL, JOHN
1762. [CAMPBELL, JOHN.] AN ACCOUNT OF THE SPANISH SETTLEMENTS IN AMERICA. Edinburgh: Printed by A. Donaldson and J. Reid for the Author, and A. Donaldson, 1762. First edition. Small 4to., xvi + 512 pp. with folding frontispiece engraving, A New General Map of America. Full calf, boards detached, spine missing. Ex-library with usual markings. Ffep through title page, pp. 505 - rfep detached. Map with North and South America, Spain's Western coast on the right, Azores, Canary, Madera and Cape Verd Islands, inset illustration of the port of Havana with identified buildings on the lower left. Map has a few small closed tears, no loss. Title page continued: "In four parts. I. An account of the discovery of America by the celebrated Christopher Columbus; with a description of the Spanish Indian colonies in the West Indies. II. Their settlements on the continent of South America. III. Their settlements in Peru, Chili, Paraguay, and Rio de La Plata. IV. Their settlements in Terra Firma. Of the different countries in South America still possessed by the Indians, &c. With a description of the Canary Islands. Each part contains An accurate description of the settlements in it, their situation, extent, climate, soil, produce, former and present condition, trading commodities, manufacture, the genius, disposition, and number of their inhabitants, their government, both civil and ecclesiastic; together with a concise account of their chief cities, ports, bays, rivers, lakes, mountains, minerals, fortifications, &c. with a very particular account of the trade carried on betwixt them and Old Spain. To which is annexed, a succinct account of the climate, produce, trade, manufactures, &c. of Old Spain." Section at the end, pp. 472-512, account of the "Siege and Surrender of the Havannah". As is, complete. (Inventory #: 89823)
$975.00 add to cart or Buy Direct from
Boston Book Company
Share this item

Gendai Sekai Bijutsuten - Higashi to Nishi no Taiwa 現代世界美術展－東と西の対話 Contemporary Art: Dialogue between the East and the West


(click for more details about Gendai Sekai Bijutsuten - Higashi to Nishi no Taiwa 現代世界美術展－東と西の対話 Contemporary Art: Dialogue between the East and the West)
View all from this seller>