The Raven and Other Poems 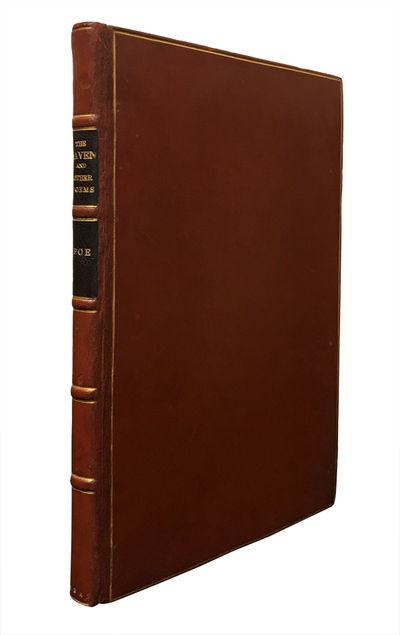 by Poe, Edgar Allan
New York: Wiley and Putnam, 1845. First edition in book form of Edgar Allan Poe's "The Raven," the single most famous American poem of the nineteenth century, first published earlier that year in the New York Evening Mirror (under Poe's own name) and The American Review (under a pseudonym). Partly inspired by the early lyrics of Elizabeth Barrett (later Browning), to whom he dedicated this volume of poems, Poe composed "The Raven" in trochaic octometer, with a deranged musicality all his own. The elements are familiar even to those who don't read poetry: the "midnight dreary," the silk-curtained chamber, the raven perched upon the bust of Athena, the relentless refrain that drives the narrator mad. "'Leave no black plume as a token of that lie thy soul hath spoken! / Leave my loneliness unbroken! - quit the bust above my door! / Take thy beak from out my heart, and take thy form from off my door!' / Quoth the Raven, 'Nevermore.'" Even before publication, Poe knew he had a sensation on his hands. When a friend described an early reading of the poem as "fine, uncommonly fine," Poe responded: "Is that all you can say for this poem? I tell you it's the greatest poem ever written." Poe's fame only increased with the appearance of contemporary parodies like "The Owl" and "The Polecat": a contemporary recalls, "'The Raven' became known everywhere, and everyone was saying 'Nevermore.'" The publication of "The Raven" paved the way for Wiley and Putnam's publication of Poe's Tales, the collection that introduced his pioneering detective fiction to a wider audience that same year. BAL 16147. A near-fine copy of a landmark in American literature. Octavo, measuring 7.25 x 5 inches: [6], 91, [1]. Early twentieth-century full russet calf, boards single-ruled in gilt, raised bands, black morocco spine labels, spine single-ruled and lettered in gilt, gilt dentelles, marbled endpapers. Handwritten slip tipped onto second fly leaf noting "inner gilt dentelles by Zaehnsdorf." Lacking original wrappers, half title, and ads. Joints expertly repaired, a few light scratches to lower board. (Inventory #: 1001883)
$12,500.00 add to cart or Buy Direct from Honey & Wax
Share this item

Washington Square. The Pension Beaurepas. A Bundle of Letters

London : Macmillan , 1881
(click for more details about Washington Square. The Pension Beaurepas. A Bundle of Letters)
View all from this seller>