Centennial Portfolio: Fifty Original Prints by Members of the American Academy of Arts and Letters in Celebration of its Centennial [Limited Edition, Signed with Large Self-Portrait by Kurt Vonnegut] 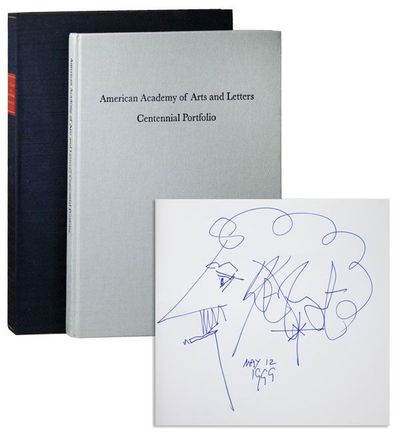 by UPDIKE, John (foreword); VONNEGUT, Kurt, et al. (contributor)
New York: American Academy of Arts and Letters, 1998. First Edition. Quarto (31.25cm); pale gray cloth, with titles stamped in black on spine and front cover; 112pp; illus. Though not called for, this copy has been signed by Kurt Vonnegut on the half-title page, with an original hand-drawn self-portrait dated May 12, 1999. Small scuff to lower margin of copyright page, tiny smudge at mid-spine, else Fine. Housed in a custom clamshell case.