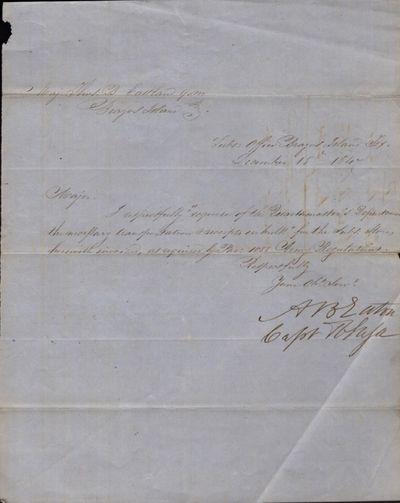 by [United States Army] [Major Thomas B. Eastland] [Amos Beebe Eaton]
Brazos Island, Texas, 1847. Document. Very good. (2) 8" x 10" sheets of paper. The first document signed at the bottom by Capt. A B Eaton from Brazos Island is dated December 15th, 1847 and is addressed to Major Thos. B Eastland q.m. The document reads "Major - I respectfully require of the Quartermaster's Department the necessary transportation receipts in bulk for the Subs Stores herewith invoiced, as required by Par 1088 Army Regulations. - Respectfully Your Obt Servt A B Eaton Capt ...sp?" The second document signed by Eaton on December 17th, 1847 is also addressed to Eastland and has the same exact content as the first letter (not a copy as the date is different and the writing has variation). A collection of Thomas B. Eastland's papers is held by the California Historical Society.

From the Confederate Veteran February 1911 "Eastland Family" "Thomas B. Eastland came to Nashville, where he was engaged in business until about 1840, when he went to New Orleans to engage in the cotton brokerage business, and where he continued until the breaking out of the Mexican War, during which he served under General Zachary Taylor as major." Thomas B. Eastland's diary titled To California Through Texas and Mexico: The Diary of Thomas B. Eastland and Joseph G. Eastland, His Son was published by the California Historical Society in 1939 and is 59 pages long.

From wikipedia: in 1846, "...it (Brazos Island) was the first military objective of the US Navy, in support of General Zachary Taylor's invasion of Mexico. Control over this important seaport was said by Harvard historian Leroy Graf to be the primary reason for the US invasion of Mexico. From Padre Island NS Historic Research Study (Chapter 3) "After the outbreak of hostilities, Brazos Island became the primary staging area for the continuing campaign. Volunteers from throughout Texas and the Mississippi Valley converged on the Island and headed inland for camps at Point Isabel and along the Rio Grande."

Amos Beebe Eaton the signer of these documents, 1806-1877, was a career officer in the United States Army. He was General Zachary Taylor's Chief Commissary of Subsidence during the Mexican War. He was a graduate of West Point in 1826 and was made Brevet Major General of the Union Army in 1865 appointed by Andrew Johnson. (Inventory #: 11957)
$450.00 add to cart or Buy Direct from Americana Books
Share this item

Recollections of Alexander H. Stephens His Diary Kept When A Prisoner at Fort Warren, Boston Harbour, 1865; Giving Incidents and Reflections of His Prison Life and Some Letters and Reminiscences

by Stephens, Alexander; Avary, Myrta Lockett (edited, with a biographical study by)

New York : Doubleday, Page & Co , 1910
(click for more details about Recollections of Alexander H. Stephens His Diary Kept When A Prisoner at Fort Warren, Boston Harbour, 1865; Giving Incidents and Reflections of His Prison Life and Some Letters and Reminiscences)
View all from this seller>