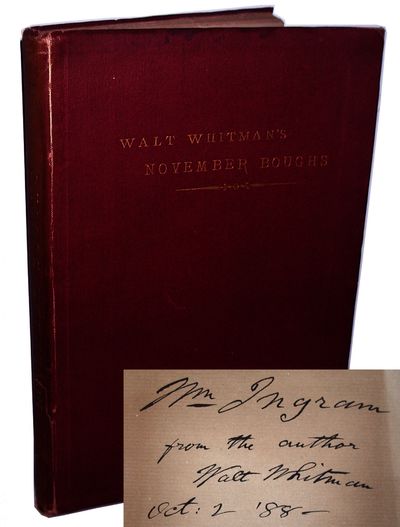 by Whitman, Walt
Philadelphia: David McKay, 1888 First edition, first issue. Presentation copy, inscribed by Whitman on the front free endpaper to his close friend, William Ingram: "Wm Ingram / from the author / Walt Whitman / Oct: 2 '88--". Publisher's flexible dark red cloth boards, lettered in gilt. One of approximately 100 special copies printed for Whitman for presentation (binding A). Spine ends lightly worn, tear to lower with a minor repair, a few small spots, light offsetting to pastedowns and endpaper, else very good or better. BAL 21430. Having published Specimen Days 6 years prior, Walt Whitman published November Boughs in 1888. A collection of new poems plus articles he had previously published, it contains insightful self-critique of his own work and what he believed would be his literary legacy. Notably, Whitman cites his magnum opus Leaves of Grass, acknowledging the public's lack of understanding of it, their outrage at its subject matter, and its failure to become a best-seller. The articles also reflect his views on society, namely his support of the working class and Native Americans, and lessons learned from his harrowing yet rewarding encounters working as a nurse during the American Civil War. Published when he himself was turning 70 years old, the poems in November Boughs are grouped under the heading "Sands at Seventy."They reflect his acknowledgment of his old age, but also his hope to continue writing until the very end, whenever that would be.. First Edition.. Hard Cover. Very Good. (Inventory #: WWM011)
$15,000.00 add to cart or Buy Direct from
B & B Rare Books
Share this item