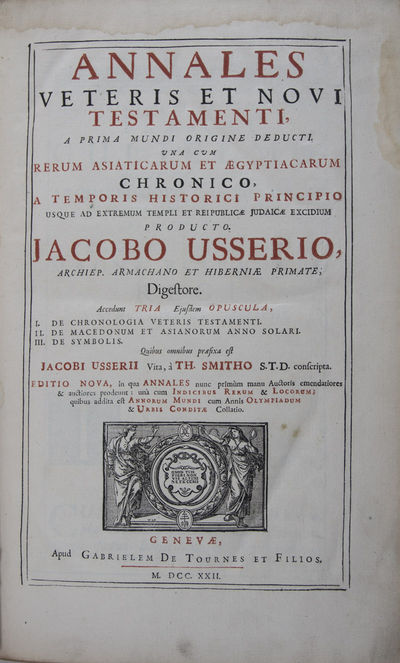 by Usserio, Jacobo (James Ussher) (Text by); Thoma Smitho (Thomas Smith) (Biography of the author by); Thomas Barlow
Genevae (Geneva): Apud Gabrielem De Tournes et Filios, 1722. Editio nova (New edition). Hardcover. fair to vg. Folio (15 1/2 x 10"). [16], lxviii, [2], 652, [100]pp (Annales Veteris et Novi Testamenti); 124pp (Chronologia Sacra + 19, [1]pp. Contemporary gilt-stamped full vellum, with the College of Amsterdam's armorial in gold on both covers. Johannes Matthias Schrant's Ex-libris on inside of front cover. Bound in, a striking school prize attributed to Johannes Matthias Schrant, adorned with a large engraved coat of arms of Amsterdam, hand-signed by the College of Amsterdam rector H. Hana, and dated April 3rd 1801. Title page in red and black lettering. Title vignette. Decorative head-, tailpieces and initials. Originally published in two parts in 1650 and 1654, "Annales Veteris et Novi Testamenti, a prima mundi origine deducti" (Annals of the Old and New Testaments, deduced from the first origins of the world) is a chronology of the history of the world formulated from a literal reading of the Bible by James Ussher, the Anglican Archbishop of Armagh (in what is now Northern Ireland). Ussher's chronology provides the following dates for key events in the Biblical history of the world: - 4004 BC: Creation - 2348 BC: Noah's Flood - 1921 BC: God's call to Abraham - 1491 BC: The Exodus from Egypt - 1012 BC: Founding of the Temple in Jerusalem - 586 BC: Destruction of Jerusalem by Babylon and the beginning of the Babylonian Captivity - 4 BC: Birth of Jesus Includes a life of the author by Thomas Smith [WITH] - Chronologia Sacra. Seu, annorum et paidopoiias patriarchum, parokias Israëlitarum in Ægypto, annorum etiam judicum, regum Judae & Israëlis 'apodeixis chronologica. Opus posthumum hucusque anekdoton: Edited by Thomas Barlow, and originally published in 1660, four years after the death of its author, this work discusses controversial points in biblical chronology. - De Macedonum et Asianorum anno solari, dissertatio: In this essay, originally published in 1648, Ussher discusses the Macedonian and Asiatic Solar Year. [WITH] - De Romanæ Ecclesiæ symbolo apostolico vetere, aliisque fidei formulis, tum ab occidentalibus tum ab Orientalibus, in primâ catechesi & baptismo proponi solitis, diatriba. Accesserunt, I. Athanasii symbolum, à græcis interpolatum. II. Symbolum aliud eidem etiam à quibusdam tributum. III. Hymnus matutinus & vespertinus veteris ecclesiæ. IV. Hildeberti cenomanensis de confessione trinitatis hymnus, & oratio ad dominum. Jo. Cassianus: Originally published in 1647, this work contains the Latin and Greek texts of the Apostles' Creed, taken from an ancient manuscript discovered by Ussher himself. Binding partly darkened and age-toned, with abrasion to vellum along fore-edge of front cover. Closed tear along front joint, with front cover holding only by the endpapers. Original strings missing. Clear water-staining along upper margin of very first and very last leaves (not affecting text). Text in Latin, with some Greek. Binding in overall poor to fair, interior in good to very good condition. * Johannes Matthias Schrant (1783-1866 ) was a renown historian, professor and rector at the universities of Ghent and Leiden. About the author: James Ussher (1581-1656) was the Church of Ireland Archbishop of Armagh and Primate of All Ireland between 1625 and 1656. He was a prolific scholar and church leader, who today is most famous for his identification of the genuine letters of the church father, Ignatius, and for his chronology that sought to establish the time and date of the creation as "the entrance of the night preceding the 23rd day of October... the year before Christ 4004;" that is, around 6 pm on 22 October 4004 BC according to the proleptic Julian calendar. (From Wikipedia). (Inventory #: 43327)
$500.00 add to cart or Buy Direct from
Eric Chaim Kline Bookseller
Share this item