ALGERINE LAW. ONE OTHER STATE BESIDES RHODE-ISLAND, HAS, WHAT SOME PEOPLE MIGHT SUPPOSE TO BE, AN ALGERINE LAW. THE CELEBRATED DAVID PARMENTER, FREE SUFFRAGE LECTURER GENERAL FOR THE STATE OF RHODE-ISLAND AND PROVIDENCE PLANTATIONS AND GRAND PLENIPOTENTIARY TO THE COURT OF ST. TAMMANY, &C., &C., &C., ONCE CREPT OUT THROUGH A SMALL HOLE IN SUCH A LAW IN MASSACHUSETTS. THE GREAT UNWHIPT WAS INDICTED, TRIED, AND FOUND GUILTY, ON THE CHARGE OF FORGERY.. 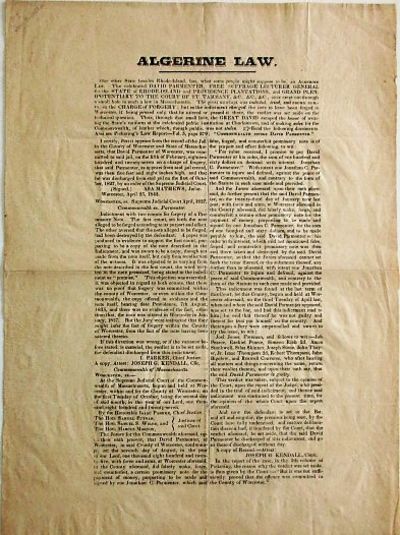 A rare broadside, probably printed in 1842 at the height of the Dorr Rebellion. David Parmenter, a Providence lawyer, was an ally and confidante of Thomas Dorr. This broadside, intended to discredit Parmenter and the Dorr organization, prints documents from the Massachusetts case of Commonwealth vs. Parmenter, demonstrating that Parmenter had committed the crime of forgery in 1827 but escaped conviction on a technicality: "Thus, through that small hole, the GREAT DAVID escaped the honor of wearing the State's uniform at the celebrated public institution at Charlestown..."
The Algerine Law, enacted by the Rhode Island legislature, rendered illegal the elections held by the Dorrites in April 1842, made it a crime to run for office in their elections, and called it treason for anyone to do so or to hold a statewide office under the People's Constitution.
DeSimone, Broadsides of the Dorr Rebellion 14. OCLC 24389916 [1- Brown] as of October 2017. Cohen 12257 [locating a copy at Harvard]. Not located at online sites of AAS, Library of Congress, Yale, Harvard. (Inventory #: 34210)
$1,000.00 add to cart or Buy Direct from
David M. Lesser, Fine Antiquarian
Share this item
David M. Lesser, Fine Antiquarian Books LLC
Offered by

A REVIEW OF THE LIFE AND CHARACTER OF ARCHBISHOP SECKER

New York : Hugh Gaine , 1773
(click for more details about A REVIEW OF THE LIFE AND CHARACTER OF ARCHBISHOP SECKER)

New York : Published by G. Lane & P,P. Sandford , 1843
(click for more details about A MISSIONARY NARRATIVE OF THE TRIUMPHS OF GRACE; AS SEEN IN THE CONVERSION OF KAFIRS, HOTTENTOTS, FINGOES, AND OTHER NATIVES OF SOUTH AFRICA. BY SAMUEL YOUNG, TWELVE YEARS A MISSIONARY IN THAT COUNTRY. REVISED BY THE EDITORS)
View all from this seller>